Bus operators in Glasgow – drivers of the fight against climate change

By 2022 all buses in Glasgow will meet low emission standards 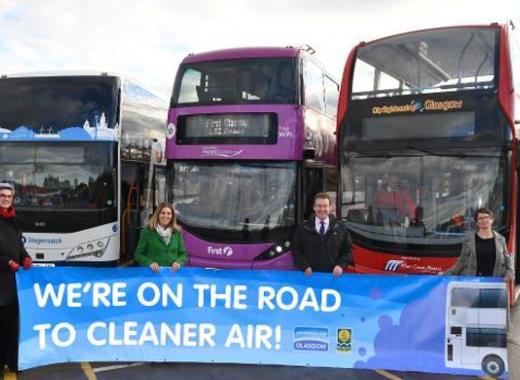 Back in 2018 Glasgow became the first city in Scotland to introduce a mandated Low Emission Zone (LEZ). On the eve of the Zone’s 2nd birthday, local authorities are eager to showcase the results and to highlight what’s in store for the future.

First introduced a couple of years ago, the LEZ currently mandates that 40% of all local bus service journeys through the city centre be made by vehicles complying with the local authorities’ stringent emission standards.

The requirement is part of the LEZ’s phased implementation process and follows significant investments made by the operators in their bus fleets and is an increase to the 20% goal set out during the first year of its enactment.

The goal of the LEZ is to protect the health of the most vulnerable in Glasgow – the young, the disabled and the elderly. By reducing vehicle emissions, the city is also significantly reducing its own carbon footprint and is thus contributing to Scotland’s overall climate ambitions.

According to the Glasgow City Council, by the end of the phased implementation process in 2022 100% of buses travelling through the city centre will comply with the low emission standards. When that target is achieved, the LEZ will be expanded in scope in order to cover other types of vehicles – like taxis and personal cars.

Bus operators have now easily managed to achieve to 40% target mandated in the current implementation phase of the Glasgow Low Emission Zone and local authorities are eager to look forward to its future.

Following in the footsteps of Glasgow are other Scottish cities. The government of Scotland has also pledged to introduce similar LEZs across urban areas in the country – for example in Aberdeen, Dundee and Edinburgh.