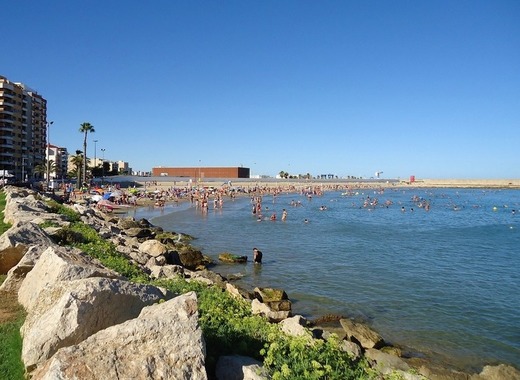 This Tuesday, blue flags were awarded to the beaches of El Pinar, Gurugú and Serradal in Castellon de la Plana. These 4.5 kilometres of coastline are distinguished for their quality of services, facilities, water and sand. The mayor of Castelló, Amparo Marco, attended the award ceremony together with the Councillor for Tourism, Pilar Escuder and the Deputy Mayor of the Grau, Rafa Simó. Their team projects a model of smart, sustainable and accessible beaches.

The mayor explained that he was very proud of the three beaches, each one with different characteristics that appeal to both citizens and tourists. He insisted that during the term of this legislature more of an emphasis will be put onto the coastal zone. Thus, issues such as the adjustment of the seafront promenade of the Gurugú and Serradal beaches, the improvement of the service and the renovation of the water channelling system on the beaches are to be addressed by the governmental team to further promote coastal tourism.

Marco also highlighted other tourism projects that should be enhanced like the aerodrome, the parking of camper vans, as well as the quality and safety of the bars on the beach. This will be done in an attempt to take advantage of the potential of the natural heritage and the facilities. The local government of the Spanish city is convinced that Castellon has to promote an increasingly intelligent, sustainable and accessible tourism.

The three beaches have had their Quality Q flag renewed thanks to the wide range of services they provide, such as the canine area, free Wi-Fi, access for people with disabilities, public toilets, showers, baby points, cleaning services, surveillance through lifeguard personnel and the local police, sea libraries, information points, sports and games areas, parasols and hammocks. Likewise, they have also received the European EMAS environmental badge and the beaches of Gurugú and El Pinar have the Ecoplayas flag, which distinguishes the beaches that stand out for their environmental quality policy.