Chasing away the starlings in Logroño 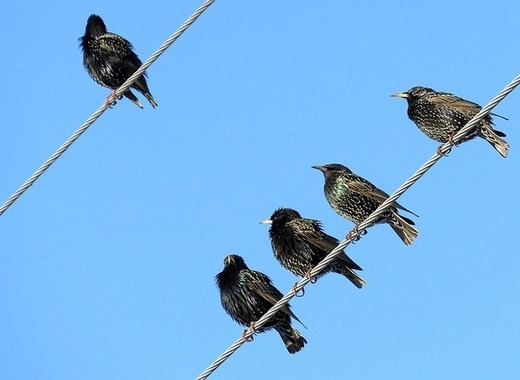 Today, José Manuel Zúñiga, the Environmental Councillor at the City of Logroño gave a press conference to report on the progress of reducing the starling populations in the Riojan capital. He explained that the preliminary results were more than satisfactory and that work on the dispersal of the noisy bird populations had to be started earlier this year, at the beginning of August, due to increasing complaints by residents in July.

In many areas of Europe, starlings are considered a pest

Starlings are common birds found in the urban areas of Europe. They have black and greenish iridescent feathering covered with small white dots. These are communal birds that like to stay and roost together in flocks which may get quite large after the mating season. They are also very noisy birds that although not very pleasant to the ear, have the uncanny abilities to mimic other sounds, including human speech.

When they get numerous, they are considered to be a nuisance in many of the European cities. Apart from the unpleasant noise pollution, they are often considered to be vectors for certain diseases that can affect humans. They can also be too unforgiving on the fruit trees harvests. In Spain, there is a season when it is allowed to hunt them.

The City of Logroño, however, has opted for some alternative measures of control. A specialized company, Larus Control, was awarded a municipal contract, to the tune of 64 130 euros and two years of duration, aimed at controlling the bird population.

"After the initial counting, population control work began, managing in the first three days to displace most of the starling population, thus of the 9,000 registered specimens only about 1,000 remained, a figure which was reduced to less than 500 in the first week, thus considerably reducing the discomfort in the affected areas,” explained Councillor Zúñiga.

Rather than killing the birds, the techniques used for the dispersal work consisted of moving alarm sounds, controlled flights from trained birds of prey and low-intensity pyrotechnics. The necessary work was carried out during the nights between 8:30 p.m. and 7:30 a.m. and will continue as needed until the end of March.

The city official indicated that it was especially the use of the predator birds that was seen as the main catalyst in introducing fear factor among the large flocks of starlings and causing a behavioural change and abandoning of the common roosting places.