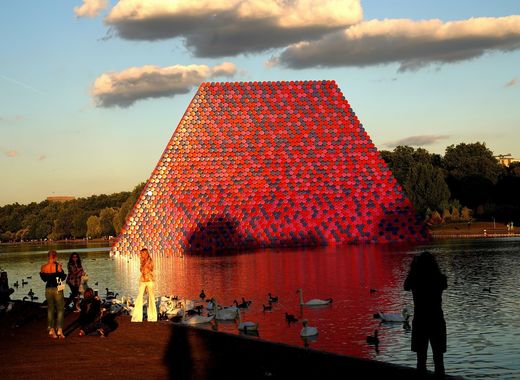 Author of the project is the Bulgarian-born Christo Javacheff, 83. “The London Mastaba”, Christo’s first major outdoor work in Britain, is now floating, through September 23 in the middle of the lake in Hyde Park. A trapezoidal pyramid of 7,506 painted and horizontally stacked barrels, it’s 66 feet tall, as tall as the Sphinx in Egypt, and weighs roughly 650 tons. Named after a flat-roofed structure with sloping sides that originated some 6,000 years ago in Mesopotamia (“mastaba” means “bench” in Arabic), it’s a test for a mastaba roughly 8 times as high that Christo hopes to put up in the desert in Abu Dhabi.

Installing the London sculpture has not been plain sailing, however. Christo had to fund the project himself, at a cost of 3 million pounds. Christo does this for all his projects, through artwork sales. He then spent a year securing permits from local authorities and from the body that manages Hyde Park, and had two and a half months to get everything done.