Some 33,688 tickets have already been issued as part of the "Health Ticket" initiative in Cluj-Napoca 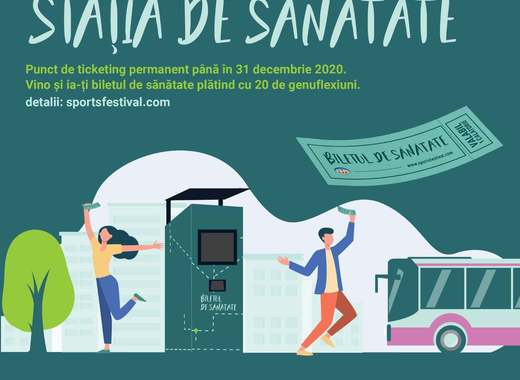 As we informed you in September, the first smart sports bus station in Romania was launched in Cluj-Napoca. The so-called "Health Ticket" is available for Cluj residents who accept the challenge of doing 20 squats in 2 minutes.

The sports initiative was planned to stay in the city until 6 October. Now the good news is that the "robot" for squatting will remain at the station on the Memorandum until 31 December.

The smart sports station set up next to the South Memorandum bus station will remain operational for at least another month. The ticket, symbolically called the "Health Ticket", is obtained after performing 20 squats and can be used for a trip on the city's public transport network until the end of 2020.

Therapy - a Sun Pharma company has joined the project and will support this action for the next few weeks. The drug manufacturer from Cluj will ensure the cost of the health tickets for that period. Previously, NTT Data and AROBS were supporters of the initiative.

Some 33,688 tickets have been issued so far as part of the "Health Ticket" action, initiated by SportsFestival with the support of Cluj-Napoca City Hall, informs the Romanian municipality.

The project was carried out in the context of European Sports Week with the aim to encourage the general public to find ways to include sports in their daily routine. The movement chosen to be included in the project is a basic one, with a major health benefit for those who choose to take part.