Cohesion in times of pandemic

In an interview for Agence Europe, Younous Omarjee, chair of REGI, highlights the role that the EU's Cohesion policy must play in the continent's economic recovery 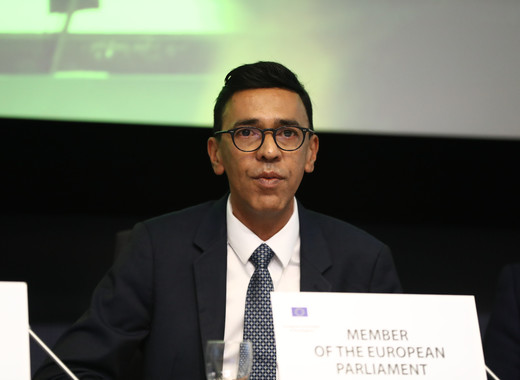 As the European Parliament prepares to vote on Thursday 16 April on new measures under the Cohesion Policy to respond to the COVID-19 crisis, EUROPE caught up with French MEP Younous Omarjee (GUE/NGL), chair of the Committee on Regional Development (REGI) and Parliament's rapporteur on the two packages of measures on the cardinal role of Cohesion Policy in meeting current and future health and economic challenges.

Member States managed to reach an agreement within the Eurogroup on €540 billion in aid to respond to the COVID-19 pandemic. Do you consider that to be sufficient?

We have seen a resurgence of reflexive national selfishness, as during the financial crisis of 2008 and with Greece, where we have a certain number of Southern States calling for solidarity and finding themselves stuck in the logic of fiscal orthodoxy, whereas, in the very year of 'Brexit', Europe must show cohesion. The general European interest is much more present in the other European institutions, the Commission and the European Parliament, than in the EU Council.

As far as the substance of the agreement is concerned, it is a start, but it may very quickly become insufficient, given that the consequences of this crisis are multifaceted and may lead to a total collapse of Europe's economies.

The President of the European Council, Charles Michel, has convened a new summit for 23 April. This is late. It leaves time for things to turn around in a country.

The Commission has presented two packages of measures to make the most of the structural and investment funds. Is that enough, or do you expect more?

The Commission has been responsive and has responded to our requests and to those of the EU Council. It has been thinking outside the usual rigid frameworks, providing maximum flexibility so that the funds can be used in the fastest, simplest, and most efficient way.

There has been a great deal of consultation between Commissioner Ferreira, the EU Council, and us. You learn from crisis. In my opinion, what has been put in place will be very useful in the future, particularly during the trilogues.

In your opinion, has the flexibility in the cohesion policy been utilised as much as possible?

We've come a long way. We must also safeguard the principles on which cohesion is based. So far, that's what's happening. We may still have some leeway.

For us, the main concern is what will happen in the next programming year. More than ever, we are calling on the European Commission to provide for a transitional regulation.

Until recently, it seemed to be rather against the idea...

That was before COVID-19. Everything's changed now. The Commission must be pragmatic. We are waiting for a quick proposal, as it did for the Common Agricultural Policy.

The President of the Commission recently announced that she wants to make the Multiannual Financial Framework the new 'Marshall Plan' to revive the European economy after the crisis. Do you think cohesion policy will have a key role to play?

More than ever! Moreover, it is clear that cohesion policy is the policy most capable of mitigating the impact of the health crisis. It has stepped up, overwhelmingly so.

We are going to find ourselves in a 2021-2027 programming period in which the face of Europe will be deformed, in which territorial divisions will be aggravated, in which the EU will experience a recession without precedent in its history. It will be imperative to support investment, employment, and business. What can accomplish this? Cohesion policy!

Some fear that the proposals made for the year 2020 in the context of the crisis - strong centralisation of decisions, a high level of flexibility - will be reflected in future cohesion policy, which would become a sort of "first aid kit" for everything and anything. What do you think of that?

This is one of the safeguards we have put in place from the outset in accepting the European Commission's requests. These emergency measures are part of a context. They must not alter the principles governing cohesion policy.

It is quite clear that cohesion policy needs to be modernised. It is a policy, in fact, that is capable of adapting to a very volatile economic and social context.

We have demonstrated this during the COVID-19 crisis, and this will obviously have consequences in future negotiations. This policy will have to be amplified!

What do you mean by amplified? Will it be necessary to go beyond the proposals made in May 2018?

In fiscal terms, clearly! Generally speaking, one cannot conceive of a Marshall Plan with a small budget and large cuts. The European Commission has a great responsibility in the current situation: when it presented its very first proposal, it mourned for an ambitious budget by proposing a low budget from the outset.

Agricultural policy, like cohesion policy, is at the centre of European action with COVID-19. These policies are far from being policies of the past and are more than ever policies to prepare for the future.

The further the European Commission goes in fiscal terms, the better. The full range of possible fiscal resources and support has not been explored to date. We are in a moment where we have to think outside the box and look for new solutions. I am among those who are in favour of the ECB being able to lend not only to the Member States, but also to the European Union.

The interview was conducted by Pascal Hansens and was first published on Agence Europe on 14.04.2020.