By building plus energy houses and retrofitting banks, Stockholm says this is mission possible 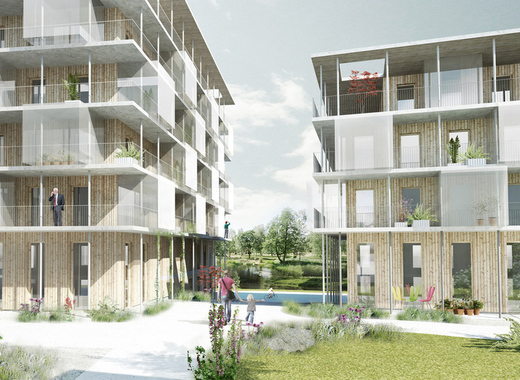 Stockholm is undergoing a veritable construction boom in recent years, so any local talk about mitigating climate change might sound somewhat cynical.

Well, think twice before you agree. Stockholm has long championed sustainability in line with the Swedish society’s nature respecting mind set. More than half of Sweden’s national energy supply comes from renewables. The country has set itself ambitious goals to achieve fossil fuel-free transport by 2030 and zero net greenhouse gas emissions by 2050. And Swedish construction companies choose not to play truant, finding climate-saving ways to build new homes and offices that are both beautiful and energy-efficient.

In 2014 Stockholm City launched a competition with a focus on aesthetics and energy consumption. Competition winner Stockholmshem, Stockholm's largest housing company, commissioned Swedish construction group Skanska to bring its climate-smart vision to life. The trailblazing development Backåkra 2, now complete, is the brainchild of architect Kjellander Sjöberg. It consists of two tenement buildings, known as plus energy houses. Both buildings are unique in many ways but most notably - they produce more energy than they can use, so they can sell the surplus on the electricity grid.

Skanska is not alone. JM AB, another Stockholm developer, now boasts buildings that use, on average, 50 percent less energy than they did ten years ago. Today all JM´s ongoing construction projects  are “Svanen-certified” – the construction business’ equivalent to Michelin’s stars, awarded for the use of climate-smart materials. According to JM’s Kjell-Åke Henriksson, climate-friendliness is not necessarily tantamount to higher construction costs. Rather, he argues, prioritizing energy-efficiency and climate-friendly materials pays off in the long run.

To build or not to build, that is the question

And the answer by Swedish real estate company Vasakronan which is aware of the immense climate-impact of concrete, is simple: renovate. Currently the company is retrofitting the shell of Sergelhuset, the old offices of SEB, in the heart of Stockholm, adding solar panels and rooftop gardens.

Housing is not the only sphere where Stockholm’s construction companies apply strict climate standards. The recently-completed Office One, an office space built for minimum energy waste at the Stockholm Arlanda international airport, is an example. The site of this project was not chosen randomly - Stockholm Arlanda is one of just 30 airports in the world to have earned a top score on the global carbon management programme Airport Carbon Accreditation.