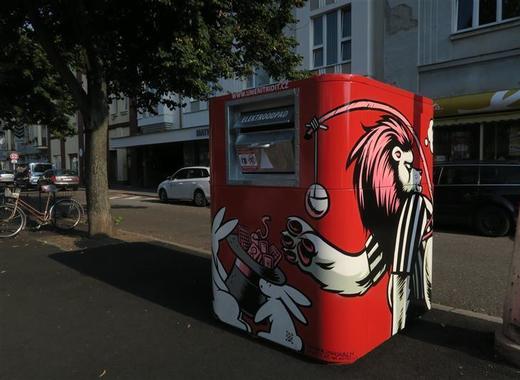 A curious campaign aiming to raise awareness for the importance of recycling of electric tools takes place in Czechia. 14 regional cities received such containers dressed in graffiti in the summer. The “Art of Sorting” project also organized an online competition to reward the most popular container. Thus, during September and mid-October, voters selected Hradec Králové for the first place also earning them a prize of 100,000 crowns that are meant to be spent on environmental activities.

“Among other things, the competition was intended to promote the dissemination of information on the need for electrical waste collection and environmental protection. The collection of electrical waste is now a very important part of the entire waste management system. Electrical equipment contains a large variety of materials that can be largely recycled” says Martin Hanousek, Deputy Mayor for the Environment with the city of Hradec Kralove.

“At present, 73 electric waste containers are placed around the whole territory of Hradec Králové. We would like to use the amount of CZK 100 000 in waste management to start a ReUse project. The aim is to find other uses of things that might otherwise end up as waste. These include books, medical aids, dishes, small household items, but also sports equipment” continued Hanousek, quoted by hradeckralove.org.

Asekol project “Art of Sorting” created 14 containers enriched with graffiti designs. “We wanted to draw attention to the need to sort out old electric waste in an unusual way and at the same time protect our containers from vandals,” explains Karel Krejsa, Asekol system director.

Artistic and functional container designs resemble the cities and their landmarks and were created by artists and sprayers led by Nikola Vavrous - Khoma. The container for Hradec Králové depicts Bob and Bobek, who are rushing to the help of Pat and Mat, a popular figure of Hradec native Vladimír Jiránek. The graphic design and rendition is work of the artist and illustrator Dalibor Krch - Max.