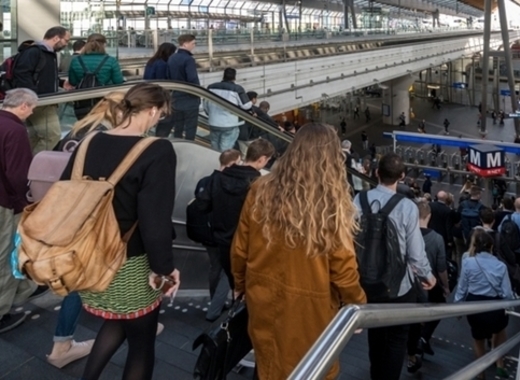 The Bijlmer ArenA station in Amsterdam is becoming a focal point for passengers at least 15 times a year. Often, there are events like concerts or football games taking place simultaneously at different locations nearby which leads to the concentration of crowds at peak times in the metro trains and at the stations in general. As everyone wants to get home as soon as possible, it is of extreme importance that public transport should guarantee rapid and safe passage to everyone.

This naturally requires serious efforts and smart approach to the management of human flow. Luckily, intelligent solutions have been introduced by the Amsterdam Bijlmer Crowd Management working group in which NS, GVB, ProRail and the municipality work together. Their latest insight: steering the flow of travellers in the right direction at peak times which has already been tested during the Juventus and Ajax game.

But what is crowd control? Hans Smit, member of the Crowd Management working group and a transport expert at the municipality, describe it as active efforts to guide large passenger flows which might also mean closing the station sometimes. Too full a station hall and crowded platforms entail risks. People can fall from the platform on the track or get under pressure. The emergency services might be prevented from reaching in time and the station - to be evacuated quickly enough, should there be a fire, for example. And if a train or metro is too full, it cannot leave because the doors cannot close. Crowd management allows the prevention of such situations to a large extent.

Thus, they do not allow more people on the metro and train platforms than can fit on the following two subways or trains. To keep people out, they have constructed an extra 'shell' with fences - similar to the ones used at large pop concerts. If it gets too busy in the station, the gates in the outer shell are closed temporarily until there is room again. And finally, extra or extra-large subways and / or trains are deployed if necessary.

But probably, the key measure is the separation of passenger flows. At Bijlmer station you can take the metro and train in different directions. By separating all passenger flows outside the station instead of at the station, the hall is prevented from becoming too full and thus – the influx can be distributed separately per platform.

Measuring equipment has been used at Bijlmer ArenA for a few weeks now and the crowds have been monitored. The authorities estimate that 5 minutes after the whistle at the semi-final match was heard, 200 people per minute flowed into the station hall. At the busiest moment there were about 500 per minute.