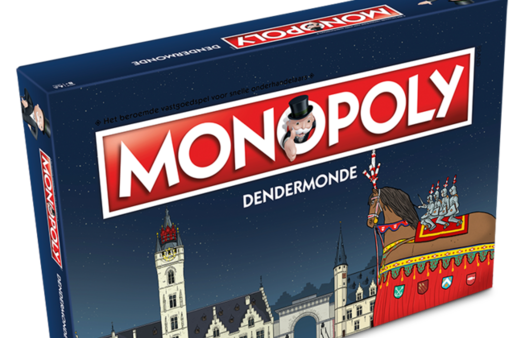 In April 2020 there will be a new and exclusive Monopoly edition: Monopoly Dendermonde. The tailor-made variation of the iconic board game offers the perfect opportunity to explore Dendermonde city. However, prior to official the launch, citizens will be asked to fill in one missing site which is currently missing from the board.

The new official Monopoly version, under a recognized license from the current publisher of the game Hasbro, remains true to its original concept but has been given a local makeover. All locations of the classic Monopoly board are adapted to existing streets, squares and sights in the Belgian city. There will be historic buildings from the municipality but also - new buildings or construction projects. For example, you will be able to buy the Town Hall or the Palace of Justice. In addition, the Chance and Community Chest cards are designed with Dendermond references.

Vote for the missing site

There is one location on the game board that has not yet been determined. Every person from Dendermonde can vote for their preferred site online. The location with the most votes will be given a place on the board. So, it will get really exciting to find out which district will collect the most votes. Learn how to cast your vote until 26 November on Dendermonde.be.

Dendermonde is a municipality in Flanders, Belgium. It has three sites included in the UNESCO heritage lists. The pride of every Dendermondenaar is the Ros Beiaard or Ros Carillon, which is classified as an intangible heritage. This legendary horse makes its rounds across the city only once every ten years. The publication of the game thus coincides with the Ros Carillon Year.

Monopoly for every city

Monopoly is a strategic game played with a board, cards, fake money and dice. Perfect for a family gettogether or a group of friends, it evolves around earning money, buying and trading property. Originally, the first Monopoly game was published in 1935 by Parker Brothers themed around Atlantic City, New Jersey.

A few years later it spread in Europe and have ever since been revamped with numerous outlooks. Other special editions of the all-time favourite game include Monopoly Brussels, Monopoly Ghent, Monopoly Urbanus.