The central office building is clad entirely in metal panels 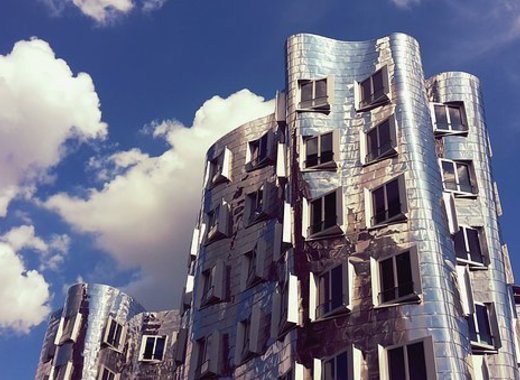 Der Neue Zollhof is situated at the Eastern edge of the Rhine River harbor front in downtown Dsseldorf, near the administrative complex of the North Rhine Westphalia province. Currently occupied primarily by warehouses, this stretch of the waterfront is being redeveloped as an urban public zone, to comprise primarily art and media agencies. Due to its proximity to the residential district immediately to the South, and to the municipal and financial district further to the East, the rehabilitation of the harbor front is intended to provide an open public amenity for the City, while underscoring the emergence of Dsseldorf as a cultural and business center.

All three buildings are constructed of concrete flat slab with punched window openings on the exterior facade. The finish material on each of the buildings is unique. The central office building is clad entirely in metal panels. The East (tallest) tower is comprised of curvilinear volumes finished in plaster, and the West tower is a grouping of volumes faced in brick.