Within them one can find not only knowledge, but also stunning works of art and architecture 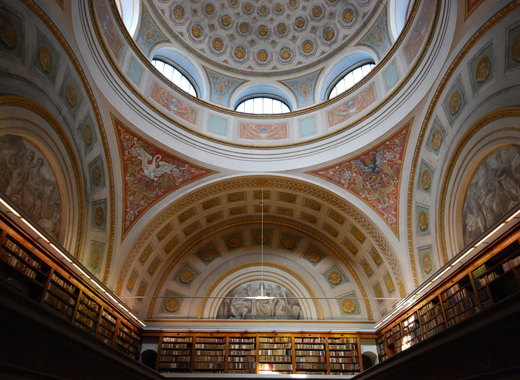 Source: The National Library of Finland, Helsinki, Finland by Vestman on Flickr (CC BY 2.0)

Libraries are the very heart and soul of every city. Helsinki is a testament to that. The Finnish capital boasts almost 40 public libraries within its urban area – and all of them are striking. Not only do they offer unprecedented access to knowledge and wisdom, but they are also beautiful in their own right.

If you’re on the lookout for a place where you can spend a quiet day reading, surrounded by gorgeous works of art and architecture, look no further. Here are some of Helsinki’s most beautiful public libraries.

The doors of Oodi library were opened only recently – back in December 2018, just a single day before Finland’s 101st birthday.

It is situated right opposite to the Finnish parliament – a symbolic location that represents the link between government and constituents and it allows visitors to enjoy a spectacular view of the city centre.

An interesting fact about the library is that it houses barely 100,000 books. Instead of conventional paper volumes, users have the opportunity to enjoy 3.4 million items through a single click of the mouse.

The National Library of Finland is the country’s oldest and most important scholarly venues. Construction of the venue was completed way back in 1840 and is considered one of Finland’s most important cultural monuments of the 19th century.

The building itself was inspired by the bathhouses of the Roman Emperor Diocletian and its facades adhere to traditional Classical temple architecture.

The National Library was temporarily closed between 2013 and 2015 due to massive renovation efforts. Upon their completion, the building was completely restored to its past glory and has been ready to greet visitors ever since.

Built in 1882, Rikhardinkatu Library was the first building in the Nordics that was at its very core designed to serve as a public library – it is a testament to the Finnish people’s commitment to ensuring equal opportunity to everyone, no matter their background.

Rikhardinkatu Library also boasts something curious – an art library. Visitors to the art library can borrow things like paintings and sculptures to take home for a set period of time.

There are plenty of things to discover in beautiful Helsinki, so don’t forget to check out the city’s profile page on our website.