Discover the Chateau of Pardubice

Are you ready for a magical holiday? The Medieval night at the Eastern Bohemia Museum in the Czech Republic is a great starting point 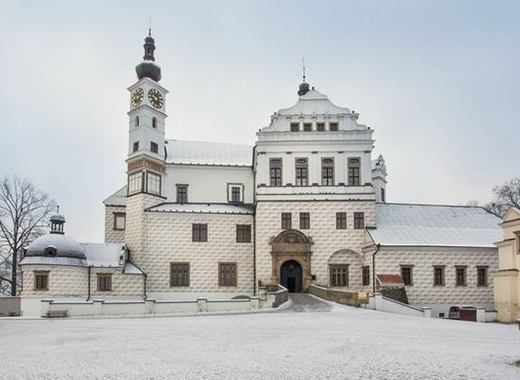 The origins of a feudal residence on the site of the Chateau of Pardubice (Czech Republic) go back to the late XIII century. It was rebuilt in the XIV century as a Gothic castle and has been reconstructed several times since.

Probably the most significant of the renovations was realised at the end of the XV century and beginning of the XVI century under the rule of the rule of Pernštejn, which led to the expansion and improvement of the original castle into a palace with an additional fortress surrounding. This way, a combination of a castle and chateau was produced which remains a unique monument of Gothic-Renaissance style in the area of Central Europe till today.

The remains of early Renaissance wall paintings and two soffit ceilings are of essential museum value, in addition to the architectural elements, such as the entrance portal. After the chateau is sold to the King in 1560, it undergoes an important reconstruction ten years later, which deprives it of the original interior furnishings. Moreover, this change of ownership is related to loosing the aristocratic residence rank for a royal chamber.

The chateau later got seriously damaged only to be repaired by the Museum Association roughly a century ago.

Now the chateau is turned into the East Bohemia Museum. It is open daily except Monday, from 10 am to 6 pm.

24th December - The castle and museum gates will be open from 21:30 until 24:00, when the eighteenth Christmas Eve Night will take place. Visitors will be able to access the Knights' Halls free of charge, the historical exposition of Pardubice - the town's story and the Passion, Time and Glass exhibition. The Three Kings Chapel and a view of the castle tower will also be opened.