Dog park built thanks to the civic budget of Lodz

An initiative by the local residents for man’s best friend 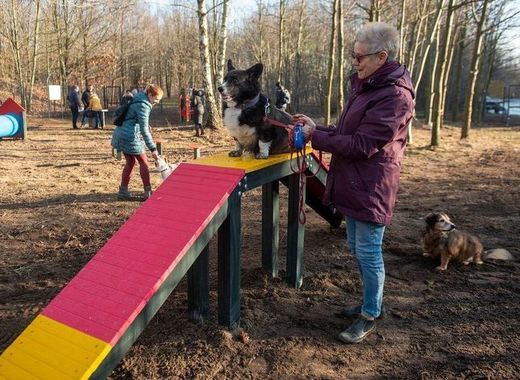 Yet another interesting example of citizen involvement in local affairs, in particular through civic budgets, comes from Lodz. As of December, the Polish city boasts a brand-new dog park, funded by local authorities as part of the civic budget.

The dog Park on Widzew can be used by all Łódź residents and their pets. This fenced area, disposes of special obstacles, thanks to which each animal will be able to run around and make the most of its outdoor time. In addition, there is a tunnel, a crossbar with 3 adjustable heights, footbridge, dog display table, benches and baskets. The area of 500 square metres needs more development but is already a wonderful place for our pet friends.

The idea of ​​the construction of the park belongs to a resident of the nearby blocks of flats, who is an animal lover and owner of two dogs. “There are a lot of dogs here, a lot of people walk around the park with dogs, we have a lot of friends here and I thought that I could do something nice about our dogs, hence the idea for the project” explains Anna Borowska, quoted by lodz.pl. “Such a dog park is, above all, a safe zone - both for quadrupeds, that in parks sometimes do not pay attention to cyclists or skateboard riders, as well as for children and young people playing in the park. Now everyone has their own space in our estate” Borowska added.

“The whole area is fenced, and also equipped with safety locks, i.e. double gates, thanks to which both when leaving and entering, animals are separated from others. This allows you to calmly and securely, fasten the leash of a pooch who might want to run outside the fence without waiting for his owner” explained Anita Waack-Zając from the Department of Municipal Management in Łódź.

Finally, the dog park project is just the beginning. The residents of Widzewa have ideas for the expansion of the space and announce the submission of further applications in the Civic Budget. The financial investment amounts to almost 100,000 zł. You could see for yourself how the development of the park is going - it is located near the skatepark Igor Kowalewski (around ul. Augustów 17/19).