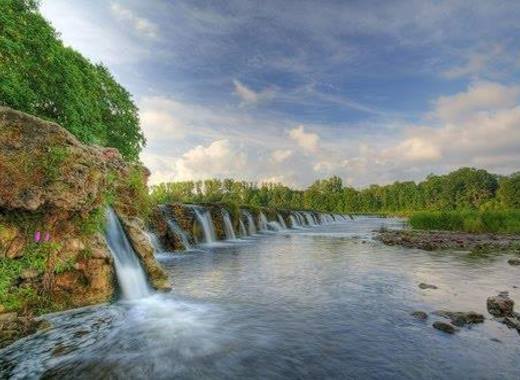 At just 2 meters tall, the Venta Rapid, or Ventas Rumba in Latvian, is one of the smallest waterfalls in the world. But its low height is compensated by its impressive width - 200 to 250 meters depending on the season.

For two nights only, Kuldīga will witness a unique light show that will illuminate the widest waterfall in Europe, Ventas Rumba. Locals say that the waterfall was illuminated once before in the 1960s, but since then it has remained in the dark, which makes this an even more unique opportunity for the citizens and guests of Kuldīga to see the magnificent Ventas Rumba like never before.

There is one more thing you need to know about this natural wonder. Each spring and autumn one can see an exciting phenomenon there, as the fish try to clear the rapid by jumping over it. That’s the reason why Kuldīga used to be called the town where you can catch salmon in the air. One could catch as many as 80—100 salmon a day.