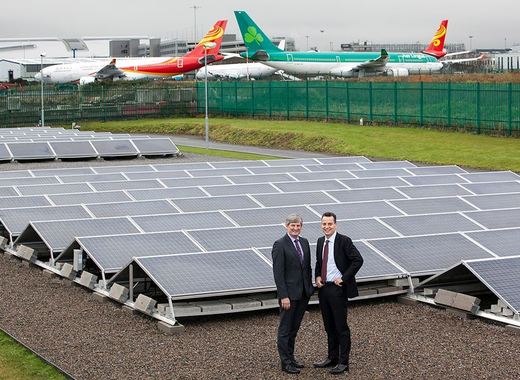 More than half of the power needed to operate Dublin Airport’s reservoir will be provided by solar, following the installation of 268 solar panels. It is part of an agreement between operator daa and energy company ESB to achieve an overall target of 33 per cent reduction in energy consumption at the airport by 2020. The solar panels are connected directly to the airport’s reservoir system which provides 500 million litres of water - the equivalent of 200 Olympic sized swimming pools - to both passenger terminals, as well as servicing all the offices and businesses on the airport campus.

Dublin Airport is already Airport Carbon Accredited, as part of a Europe-wide airport carbon management certification program that covers more than half of European air passenger traffic. Over the past three years Dublin Airport succeeded in reducing its carbon footprint by 5000 tons, which is equivalent to a 10% reduction in carbon emissions under its control. This will deliver 150 million Euros in savings on energy costs for over 300 large businesses in Ireland and the UK by 2020.