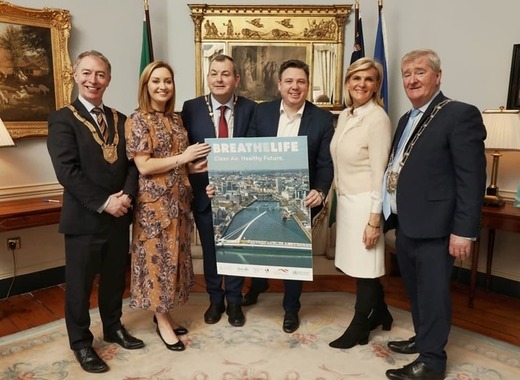 Dublin today became the first city in Ireland to sign up to the BreatheLife campaign, initiated by the World Health Organization (WHO). Thus, the Irish capital joined the league of 76 Cities, Regions, and Countries around the world which have undertaken a commitment to bring air quality to safe levels by 2030 and collaborate on the implementation of clean air solutions.

In a rare joint pledge, the Deputy Lord Mayor of Dublin and the Mayors of the other 3 Dublin local authorities signed up to the BreatheLife campaign, calling on all Dubliners to be ‘Climate Brave’. They voiced their conviction that local governments must allocate more road space to walking, cycling and public transport; phase out burning solid and fossil fuels for the purpose of home heating; and help making the right choices simple and affordable for everyone.

Following the signing ceremony, the four signatories took part in a landmark event at the Mansion House, attended by national and regional policy makers, officials, researchers and stakeholders. The discussion focused on identifying how to harness the combined resources engaged in climate change action, air quality management, and health protection to bring about meaningful improvement in the quality of life for all the citizens of Dublin.

According to chilling WHO data, air pollution is responsible for 7 million deaths every year. 92% of people around the world breathe air which doesn’t meet the recommended quality guidelines.

Climate activist Beth Doherty, quoted by the Dublin City website, said on the signing of the commitment: "Solving this crisis will require large, brave leaps, not just steps, towards concrete climate action as a city. We need to target the key roots of the issue head-on, acting where it is needed most, improve sustainable infrastructure, and ensure that sustainability is accessible to all to ensure Dublin makes a just transition towards a brighter and cleaner future."