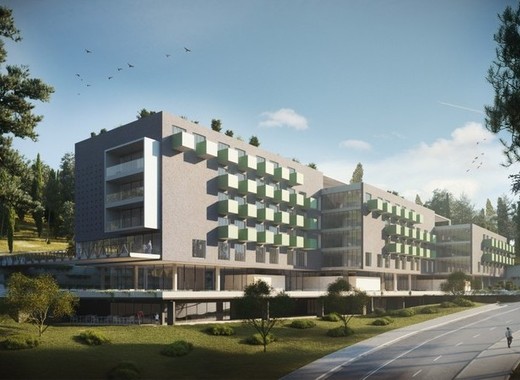 A new care home for the elderly will be built in the immediate vicinity of the Dubrovnik General Hospital. The planned capacity of the building will allow the home to accommodate about 200 elderly people, while having a maximum number of daily users of about 75.

The facility is one of the key flagship projects by the City of Dubrovnik. Plans to build a care home on the same site go back nearly 30 years.

Hotel-like accommodation for the elderly

Author of the conceptual design plan is the architect Tin Sven Franić, a professor at the Faculty of Architecture in Zagreb. He has paid special attention to the spaces for daily users where there will be enough room for rest and social activities.

The residents of the care home will have a restaurant, a doctor's cabinet and physical therapy facilities at their disposal. The building will also be equipped with a library, a coffee bar and a multi-purpose hall. Part of the area around it is also intended for the construction of a promenade, and according to the conceptual design plan, the care home will also boast roof gardens and terraces with sunbathing areas.

According to the information published by the city administration at the first presentation of the conceptual design plan that was held last year, the care home will have 3 pavilions, and the total area of the facility will cover 11 thousand square meters. The thought behind the project is that the elderly who are mobile will be accommodated like they would have been in a hotel, while the other part of the building will provide enhanced care and will function like a hospital. However, the author of the conceptual project Tin Sven Franić also wants to create a space in which the eldelry will feel at home.

Construction is scheduled to begin in 2021 and the contract for the provision of design services signed by the mayor Mato Franković has a total value of 1,336,250 kunas. According to estimates, the construction of the new care home will cost between 100 and 120 million kuna.

Upon signing the contract, the city administration announced that the project can meet part of the need for accommodation of the elderly citizens of the city, and therefore social infrastructure remains a priority for the City of Dubrovnik. On the same note, local authorities announced that the construction of another care home, in the existing Hotel Gruž, will also begin next year.