e-Busway has been launched in Nantes

Innovative, more comfortable and 100% electric, the new bus model will accommodate up to 35% more passengers 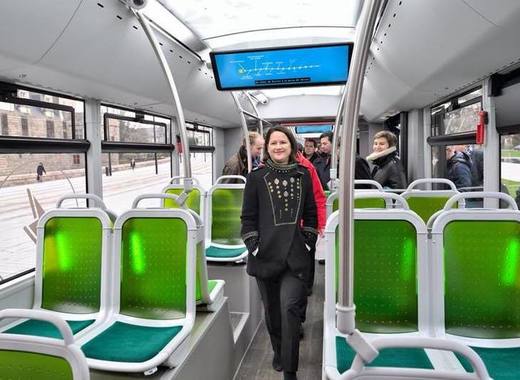 The Mayor of Nantes Johanna Rolland unveiled on Wednesday December the 12th the first bus from the innovative e-Busway models, which are soon to serve the line 4 in the city. The first vehicle will do test drives with no passengers between February and May 2019. Following a decision taken back in 2015 to improve the service of the line and facilitate its energy transition, the first innovative vehicle is now a fact. It is 100% electric, 24 metres long with 35% more spaces for passengers, produces less noise, and starting from September 2019 there will be 22 of its kind to serve the growing demand of the citizens and visitors of Nantes.

Moreover, the new and more comfortable bus constructed by the company Hess and ABB in Switzerland disposes of double articulation, 4 double doors and will be decorated in white and green, as designed by the local company Graphibus and in line with the existing park of bus. The seats will also be provided with USB ports and informational displays will be visible.

The innovative solution is part for a wider strategy of the French city to develop smart public transport. Starting in 2006, the bus line 4 was launched and was immediately undertaken by passengers, the latter increasing in number with 65% within 10 years. This amounts to more than 41 thousands passengers per day, which are about to increase to 56 thousands once the new model goes out on the road, according to the new Plan of urban mobility (PDU) 2018-2017. The line of the bus is 7km long between Foch-Cathedrale and Porte de Vertou, passed within 20 minutes and is supposed to be expanded to the periphery of the city in 2021, in order to deserve the vineyards and other zones.

The project amounts to 52.9 million euro, including the new vehicles and the adaptation of the existing infrastructure of the terminal stops.