Elbphilharmonie – the new symbol of Hamburg

It is a total work of art with an exeptional location 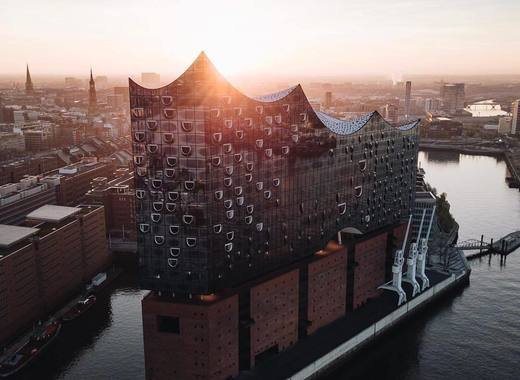 The Elbphilharmonie Hamburg is a total work of art, it combines innovative architecture with an exceptional location, outstanding acoustics and a visionary concert programme. The Elbphilharmonie with its impressive glass facade and wave-like rooftop rises up from the former Kaispeicher building on the western tip of the HafenCity. Accommodated inside are two concert halls, a hotel and residential apartments. Between the old warehouse and the glass structure is the Plaza - a public viewing area that extends around the whole building. The impressive concert hall is a defining feature of the Hamburg skyline.

Concerts at the Elbphilharmonie and at the Laeiszhalle are presented by a wide variety of promoters. Each season’s music programme (August to July) is announced to the public in the first half of each calender year – and remains ever-expanding over the course of the season. The Grand Hall, the heart of the Elbphilharmonie, has seating for 2,100 guests.