End of the Spitzen

Over 30 hours of talks between EU leaders produced what some might call a rushed backroom deal. What was going on? 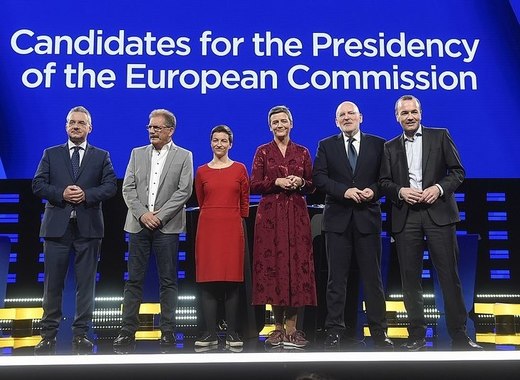 It could all have been so easy – if some form of transnational pan-European lists was adopted, if the parliament did not end up as fragmented, if the two main parties had managed to stem their losses, if the European People’s Party had chosen a lead candidate that was actually electable. But that's all ifs and maybes.

The reality is that these last European elections muddied the waters so much that nobody was prepared for their result and nobody knew how things will turn out – all parties dug in their heels and some refused to compromise until literally the last hours of negotiations. But now, the situation is finally sinking in – the world has changed and it will not go back to what it was prior to 26 May 2019.

At least we tried, right?

Some national leaders wanted to get ahead of the curve – to finalize a tentative agreement before the official continuation of talks. The attempt would have achieved three things had it succeeded – it would have managed to win a race against the European Parliament electing its president, which would have reduced the Council’s wriggle room, it would have somewhat preserved the Spitzenkandidat process and it would have achieved geographical, political and gender balance in the EU’s top jobs.  The three leaders met in Osaka, Japan, at the G20 summit. Angela Merkel, Pedro Sanchez and Emmanuel Macron represented the three main power political families as well as the most powerful countries on the continent. They brokered a compromise which would have led to the centre-right forfeiting most of the top posts in the Union, placing Frans Timmermans of the socialists as Commission president and granting Manfred Weber the consolation prize of the Parliament chief.

Surprise, surprise – this did not fly with Angela Merkel’s colleagues. Following a meeting of EU leaders, the internal EPP opposition spearheaded by Ireland, Hungary, Croatia and Bulgaria managed to torpedo the so-called Osaka compromise. Tensions in the room were high, according to diplomats - the EPP heads of state felt entitled to the post of Commission President because their party won the most seats. Not only that, but they also wanted their own Spitzenkandidat, Manfred Weber, to take the post – despite him being ruled out by literally every other mainstream party in the new European Parliament.

“And I would have gotten away with it too, if it weren't for you meddling kids”

The stubborn insistence on Manfred Weber’s candidacy was one of the main reasons which led to the deadlock in the talks and the eventual death of the Spitzenkandidat process. Had he not been himself, things might have turned out different. If only there had been a candidate who stood by the rule of law and has always been critical of Viktor Orban, someone who had rich executive experience and someone who might appeal to socialists and liberals alike… Well, technically there was – former Finnish Prime Minister Alexander Stubb, but his candidacy was rejected in favour of that of Weber during the EPP primaries. Strike 1.

The hands of the liberals in the European Parliament are also not clean - especially those of Emmanuel Macron who some might say killed the Spitzenkandidat process himself. The lack of transnational lists was key for the liberals from the getgo. The refusal to create a pan-European constituency drove them to the conclusion that the Spitzenkandidat process was pointless since only citizens of one country could vote for the so called lead candidate (for example only Germans could vote for Weber).  In any case, Strike 2.

And finally, the Visegrad 4 who took pride (quite literally and publicly, on Twitter) for killing the candidacies of Manfred Weber and Frans Timmermans. Apparently countries without rule of law dislike candidates who value the rule of law – who would have imagined such a twist. They, alongside Italy, managed to form a blocking majority against decisions of the other countries and made their voices heard – loud and clear. Strike 3 – the Spitzenkandidat is out.

When it was made abundantly clear that the lead candidate process is dead and gone, everything was on the table. Hundreds of names were thrown at the issue of the top jobs, hoping some of them might stick. As night turned into day and the Council was reconvened, leaders were not particularly optimistic. But they had to rush. If the parliament managed to elect a new president, they would have drawn first blood and heads of state would have to adjust.

On the following day, with redoubled efforts and following cryptic tweets made by Council President Donald Tusk a light began to emerge. French president Emmanuel Macron was touring the rooms of other countries with two stacks of paper – one coloured in red, representing Frans Timmermans and his barely surviving candidacy and one coloured in blue, representing Ursula von der Leyen, the defense minister of Germany, who barely anyone had even mentioned in the hours prior. But there she was – Ursula von der Leyen was now the frontrunner with political correspondents from around the world tweeting a storm regarding her potential candidacy and credentials.

She represented the perfect compromise:

With the compromise of Ursula von der Leyen, everything else fell into place. The other top jobs were divided amongst the liberals and the socialists. To replace Donald Tusk at the head of the Council, in comes Charles Michel former PM of Belgium –a country in a constant compromise with itself. Who better to search for compromises between 28 nation states? The socialists yet again got the spot of High Representative with Josep Borrel, former Spanish foreign minister – in yet another win for federalists. They also got to head the European Parliament – for the time being at least.

Yet everything hinges on one thing. The delicate balance achieved in the Council meetings might be disrupted if the European Parliament rejects the nomination of Ursula von der Leyen for chief of the Commission. If that does come to pass, the European Union will fall into a deep institutional and constitutional crisis the likes of which it hasn’t seen ever before. But we’re not there yet. You can be sure we’ll be following the proceedings and will be updating you every step of the way.