Environmental contradictions over a disused farm in Malta

Local authorities in Birguma, Naxxar refuse to grant a permit for the re-development of property 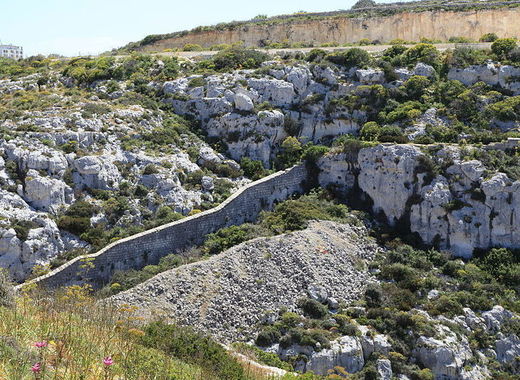 Source: View from Triq Għaxqet l-Għajn in Għargħur to the Victoria Lines crossing the boundry between Għargħur and Naxxar / MaltaFrank Vincentz on Wikimedia (CC BY-SA /3.0)

Birguma is part of Naxxar, a locality in northern Malta known for its many fortifications, villas and small palaces dating from the 18th century.

In the same area, there are numerous structures that can be defined as separate premises and used for different purposes. The owner of one of these locations, registered as a farm according to the development plans, wants to turn it into a two-storey villa. According to the owner, the farm has not been operational since 2003.

Starting in 2017, he has applied three times to obtain a permit to demolish the existing buildings and, in their place, to build a two-story villa. Apart from that, the owner wants to build a reservoir and a fence with a gate leading to the main road.

Last year, in 2019, the municipality refused to approve such a plan, arguing that the entire area is meant for agricultural purposes and has a unique topography and ecosystem. According to them, such a construction will disrupt and change the appearance of the entire valley.

The municipality also noted that if the construction of such a building is permitted, this would set a precedent and other owners would also take advantage and apply for redevelopment. And this is unacceptable.

At the beginning of 2020, the Environment Authority also gave their opinion on the project. According to an official who is responsible for analyzing this project, the proposal also contradicts the guide for rural management and policies.

According to him, there is no evidence that the buildings are no longer used for their intended purpose. Moreover, their size in no way damages the surroundings and does no harm to the environment, while demolition and conversion will do just that.

Another concern comes from the fact that the proposed building will be three times larger than the existing ones. Policies and regulations do not allow the newly built-up area to be larger than the reconstructed one. If the villa is used for tourism, it would trigger subsequent requests for the construction of a parking lot, a swimming pool, etc.

Such projects change the overall topography of the area in which they are to be built and the ban on similar activities is a good example of how certain areas and territories can retain their original appearance and environment.