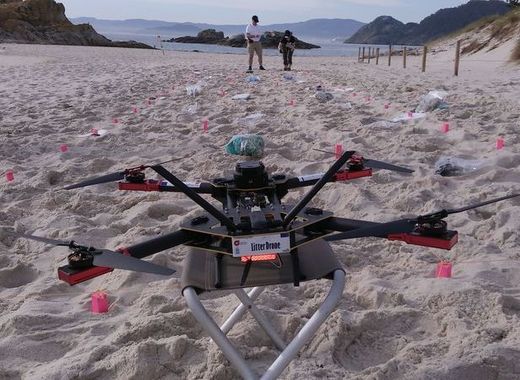 A project, co-funded by the European Union, tests new ways to tackle marine litter. Between 2017 and 2019, LitterDrone has been developing an innovative technology to enable drones to monitor the condition of coasts and detect the presence of trash, helped by recognition software.

The LitterDrone project (Development and Exploitation of Innovative Tools for Remote Marine Litter Control and Management through UAVs) aims to develop a pilot system for the characterization of marine litter off the coast of Europe. It will use new technologies such as unmanned aerial vehicles (drones) equipped with high-resolution cameras that will carry out sampling on beaches.

The images obtained through these methods will be processed through specialized image recognition software. This allows for the marine litter objects found to be characterised properly. The information obtained can thus be used by the relevant agencies to design and implement prevention and mitigation measures against marine litter.

The fieldwork of the project is taking place in the Maritime-Terrestrial National Park of the Atlantic Islands of Galicia, Spain which is an area of ​​enormous ecological importance and particularly difficult to access and whose beaches are already being monitored by traditional methods.

With around 39,000 items found on Spain's beaches annually, a spectacular 72% of which are plastic, the project aims to contribute to the country's efforts in resolving the problem. One of the most harmful materials for the environment represents a danger not only to humans who can ingest microplastics but also to marine animals.

The project is coordinated by the University of Vigo with Spanish Marine Litter Association (AEBAM) and Grafinta S.A as project partners and is being implemented between 2017 and 2019. It has received co-funding by the European Union, by the “Blue Labs: innovative solutions for maritime challenges” program, implemented by EASME as part of the work program of the European Maritime fund.