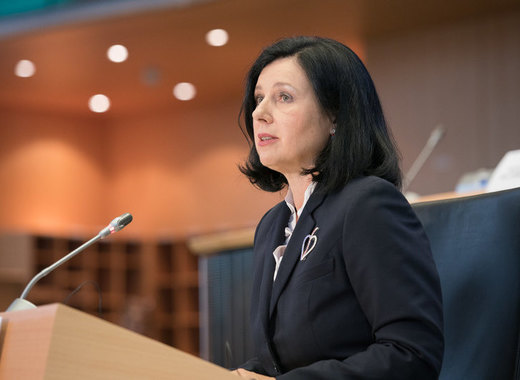 Source: Hearing of the 2019-2024 EC Vice-President Věra Jourová by European Parliament on Flickr (CC BY 2.0)

Throughout the past few months and during the very onset of the coronavirus pandemic, European citizens were bombarded with fake news stories and disinformation related to the crisis. Said falsities covered topics ranging from the source of the virus, to possible treatments and featured all kinds of foreign state-sponsored propaganda.

The European Commission, however, was quick to note the increase in traffic to such “alternative” sources of information and launched its own initiative aimed at fact-checking and setting the record straight when it comes to the virus.

Following its initial push during the first weeks of the pandemic, the EU’s executive has now announced new measures that will ensure the long-term health not only of the Union’s citizens but also of its media environment.

Building upon already existing legislation and pacts made between institutions and social media giants, the European Commission wants to explore other ways of promoting the truth and the separation of facts from fiction. That is why it will be working alongside national and international actors like governments and the UN on the one hand, and with citizens and researchers on the other.

The Commission wants to boost its efforts in supporting the efforts made by private citizens through their initiatives by allocating additional funding and support for fact-checkers and researchers specializing in disinformation and the battle against fake news.

Furthermore, with the help of funding and support provided through the Erasmus+ programme and the European Solidarity Corps, both under the guidance of Commissioner Mariya Gabriel (one of the architects of the pact made between the EU’s institutions and tech giants), the Union’s executive wants to strengthen the EU’s civil society and make it more resilient to fake news and disinformation.