In the framework of connected and automated mobility in Europe an experimental site was opened between Luxembourg, France and Germany 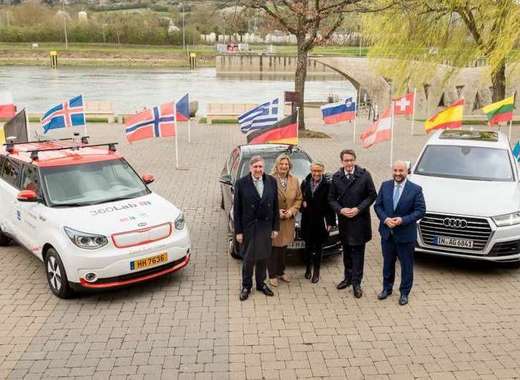 Cross-Border Digital Testbed Project Day has been organized on 3rd of April in Schengen, Luxembourg. The village where the cornerstone Schengen Agreement was signed in 1985, also known as the birthplace of Europe, was selected for the launch of another key European mobility project. Thanks to its geographical location connecting Luxembourg to Germany and France, the village welcomed this Wednesday governmental representatives from the three countries for a cross-border pilot testing of autonomous vehicles.

Thus, the project promoting mobility standards of the future is an expression of the common will of the three European states to further develop the industry, research and science and to test innovative experimental technologies of scale that could work beyond national borders, regardless of the road category - from highways to urban environment. Currently, the pioneer project extends to the South part of Luxembourg, the North part of Region Grand-Est in France and Land de Serre in Germany. A part of the path has witnessed reproductions of real-life situations of autonomous driving, border crossing without the automobiles losing connection.

François Bausch, Minister of Mobility and Public Works of Luxembourg underlined the importance of digitalization and automatization in the transport sector for reducing the carbon emissions and traffic congestions and for the diversification of the transport offer while the automatization already enhances road safety. Andreas Scheuer, Federal Minister of Transport and Numerical Infrastructures of Germany stated that the partners are set to reinforce the key competence of Europe and Germany in particular in the automated and connected vehicles, which are mostly European-licensed. Elisabeth Borne, French Minister responsible for Transport concluded that these technologies, among others, bring better adapted solutions to different environments, particularly rural. Here is why, she continued, the interoperability and security validation must be guaranteed at European level.