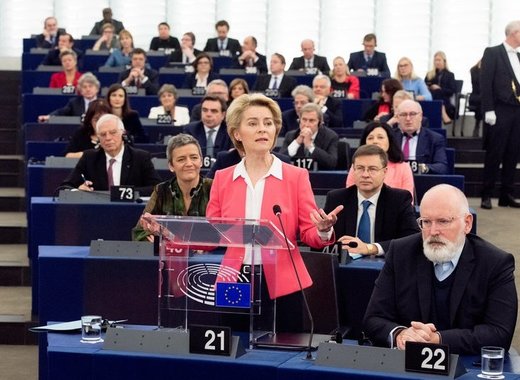 “Let’s get to work” – this is what the new President of the European Commission, Ursula von der Leyen, said during her opening statement ahead of a crucial vote on her College of Commissioners in the European Parliament plenary in Strasbourg.

With a passionate defence of multilateralism and the global world order and an appeal to do more to fight climate change, Ursula von der Leyen’s speech managed to further convince MEPs that she and her commissioners-designate were the right people for the job. With a majority of 461, the Ursula von der Leyen commission will begin its term with comfortable legitimacy.

Ursula von der Leyen’s journey to the Berlaymont building was fraught with stumbles and plagued by constant issues and disagreements with MEPs.

First, she faced incredible scrutiny before her approval as President of the European Commission.  Von der Leyen’s candidacy and nomination proved to be a very difficult pill to swallow for the European Parliament, whose members saw their Lead Candidate (Spitzenkandidat) system dismantled and tossed aside.

After barely managing to scrape by by achieving a majority of just 9 votes on her confirmation hearing the President-elect’s fight with the European Parliament immediately resumed upon her announcement of her new College of Commissioners – not only were some of the individuals deemed problematic during the hearings, which delayed the confirmation of the entire team by a month, but so were some of the names of the portfolios themselves – which led to the need of some quick last-minute changes.

Nonetheless, despite all the obstacles put in their way, Ursula von der Leyen and her new team have now won the approval of the European Parliament and will begin work on 1 December 2019.

And here is the full list of the new Commissioners and their respective portfolios:

Together with her brand new team, Ursula von der Leyen will be faced with the challenges of a rapidly changing and evolving world – and their victories throughout the next 5 years will undoubtedly be felt by every European citizen.