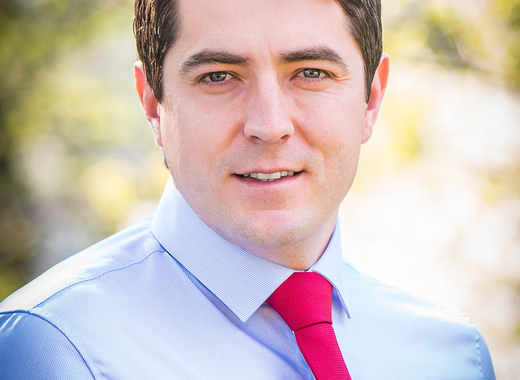 Marko Vešligaj was born on 17 April 1982. He graduated from the Faculty of Economics in Zagreb and the postgraduate specialist study "Adapting the EU: Project Management and EU Funds and Programs" at the Faculty of Political Science in Zagreb.

Today, he is a member of Presidency of the SDP township and the vice-president of the county organization SDP Krapina-Zagorje county. From 2005 to 2009 he worked as a councilor at the County Assembly of the County of Krapina-Zagorje and was a member of the Finance and Budget Committee, and from 2009 to 2013 he was a city councilor in the Town Hall of Pregrada and the President of the Chamber of Town Halls and Councilors of SDP-ZS -A-HSS.

The city of Pregrada is rich with architectural heritage from the past. What else do you want our audience to know about it?

The name Pregrada was first mentioned in 1334 on the list of archdeacon Ivan Gorić. The patronage right over the church was owned by the Keglević family who owned Kostelgrad, to which the Pregrada belongs until the end of the 19th century.

The building up of the Kostelgrad begins in about 1242. At the end of the 16th century the Keglević family built the castle of Gorica, and a little later began the building up the Dubrava castle. The Kostel fortress was gradually being abandoned during the 17th century and was completely abandoned in the 18th century.

It is worth mentioning also the Bežanec Castle which was built at the end of the 17th century. It belonged to the Ottenfels family, who were originally from Carinthian. At the end of the 19th century, or at the beginning of the 20th century, Adolf Alfons Thierry founded the first chemical and pharmaceutical company in Southeast Europe right in Pregrada. Thanks to him and his company, the City of Pregrada already had a phone in 1903.

Also, at this time there was coal finding in a famous city mining. In 1953 our coal plant grew so strong that it became an independent work organization known as Colliery Pregrada.

Mayor Vešligaj, you are very young and very active mayor. What are your biggest challenges?

The biggest challenge we’re facing is how to bring the city administration closer to the citizens of Pregrada, both to the young and the elderly. Also, one of the challenges is to successfully apply to EU funds and to implement European projects in our city.

Croatia is a member of the EU since only 5 years, but your municipality has already managed to implement European projects. Tell more about how they improved the quality of life in Pregrada?

European projects are crucial for development of municipalities with low budget revenues because only EU funds can ensure further progress of the city.

The City of Pregrada leads by funds received from EU funds: In the past year we have made 800.000,00 Euros for 4 projects: building up the recycling yard, road construction, energy renovation of the City administration building and construction of the forest road. We also got 64.500 Euros for educational workshops on waste management and 7.150,00 Euros for Erasmus + project: Key Activity 3: Structured dialogue between young people and those responsible for youth policy.

Our Red Cross Office in the City of Pregrada is also successful with European projects, through which they’ve employed 13 women from Pregrada. They will work on supportive activities for older and disadvantaged people, helping them with food delivery, helping to prepare meals in their homes, assisting in the maintenance of their home, dressing assistance, hygiene care, assistance in social integration and involvement in society. The city of Pregrada also encourages small economy through stimulating entrepreneurial measures.

We subsidize interests on entrepreneurial loans, enable exemption from communal fees and contributions and build and arrange the City’s business zone.

Like I said earlier, energy renovation is very important to us, and so are the ecology and environment. We have already done energy renovation of our kindergarden so that our children can have better and healthier conditions for growth. The part of the funds for renovation of the kindergarten’s roof we gained through crowdfunding campaign “You and me together for Pregrada’s Kindergarden.

Yes, I think there is a problem, but not because there isn’t a platform for gaining information on this subject, but because lack of interest and wrong approach.

I believe that connecting people from different European countries and exchanging their experiences can lead to increasing of interest among European citizens.

What do you think about a unified platform for European municipalities and its main goal to make and keep European citizens better informed about what is taking place in the European Union? How the portal can be useful to a small municipality as Pregrada?

I support this initiative because of the possibility of connecting European municipalities, co-operation on EU projects, which leads to the development of municipalities and because of the exchange of good practices. Exchanging ideas brings people closer and unites them.

What will be the main goals you are planning to develop in the near future?

In the near future we plan to build a cultural and tourist-information center that we have applied to the EU funds. We also want to provide facilities for young people by arranging the cinema and opening a youth center.

We are waiting for opening a call for proposals so we can apply project of our natural (eco) pool so we can start with its construction. We also plan to build a tennis court and energy renovation of the building of the Football Club of Pregrada and the Building of the Land Registry Department in Pregrada.

To find out more about Pregrada, visit the profile of the municipality.