Famalicão goes for complete refurbishment of its central core 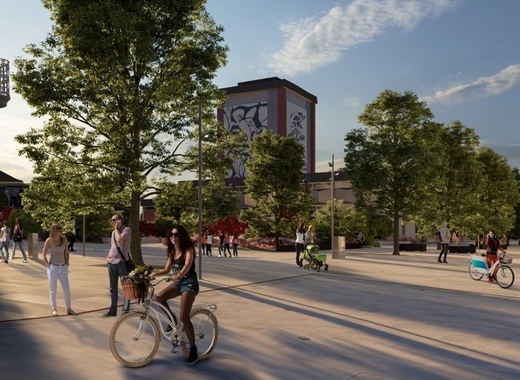 “A New Centre. A New City” – this is the motto that heralds over a project of rehabilitation of the town centre of Vila Nova de Famalicão. Work on it is slated to start on Monday, 19 October and will last for a year. When completed it will transform the downtown area of the Portuguese city into a space that is considerably friendlier to the pedestrians, the environment and small businesses.

Car traffic will be severely restricted but not completely eliminated

The budget for the grand initiative is 8 million euros and is partially financed by the European Regional Development Fund. As for the geographical scope, it will cover the areas north and south of Maria II Square and the Mouzinho de Albuquerque Square.

There will be a significant expansion of pedestrian areas at the expense of motorized traffic. Mouzinho de Albuquerque, which is currently considered a very degraded area of the city will be rehabilitated with the re-organization of a parking lot and enhancement of the riverfront of Pelhe River.

"It is a whole new urban paradigm that will be enhanced in the central core of Vila Nova de Famalicão that will allow the enjoyment of public space with a quality of life that is much higher than the existing one," said Paulo Cunha, the mayor of the city.

Still, the Mayor had to admit that while the renovation process is ongoing that might cause certain inconveniences to the residents and visitors, so he also asked for patience and understanding promising that the results will make it worthwhile.

The parking lots located at Maria II and Mouzinho de Albuquerque Squares will be shut down, however, drivers will be provided with alternative spaces.

The Municipality informed that there will be free parking spaces in the fairground field and a free parking lot, located at the two main entrances of Parque da Devesa. In addition to these, there is also the option for a paid car parking located next to the City Hall.