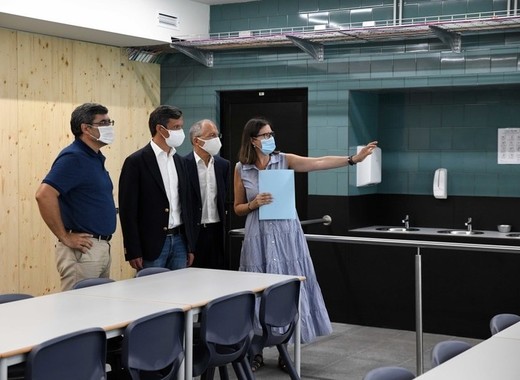 Earlier this week, the Mayor of Vila Nova de Famalicão, Paulo Cunha, presented a project which is an essence the second phase of the renovation of Ribeirão Primary School. This will see a substantial refurbishing to the educational installations in the small community located south of the municipal centre.

The first stage of the renovation project has already been completed. It involved the revamping of the multi-use student building, which now includes a study hall, a library, a cafeteria and a kitchen.

The announced second phase will be even larger in its scope. For one, the multi-use building for teachers, management and admin stuff will be remodeled.

However, the addition of extra value will be provided with the construction of a new building on the school premises. This will house classrooms, laboratories, a teacher’s room, copy room, a covered playground and an open-air auditorium.

Mayor Cunha also addressed the financial side of the matter: “This project has an estimated cost of over 5.5 million euros and a guaranteed financing of 2.2 million, which means that community funding does not reach 50% of its cost and that the municipal contribution of the residents of Famalicão is more than 3 million euros. Never in our municipality has there been such a huge budgetary effort for school intervention, especially given that the management of that school is not under the municipality, but directly under the Ministry of Education”.

Last Thursday the City Hall approved the opening of a public tender for the carrying out of the contract. Both the Mayor and the School Principal Elsa Carneiro expressed satisfaction and pride that this project shows that modernizing education is a matter of priority for the region.