"In the next years we will work on sustainable mobility, enhancing the network of cycle paths, bike sharing, car sharing and increasing the pedestrian areas in the historic center." 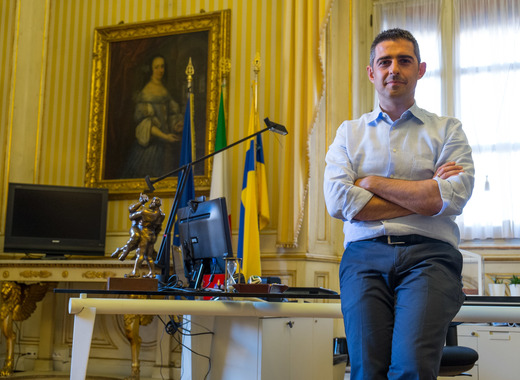 Federico Pizzarotti, mayor of Parma elected for a second term in June 2017. A young mayor who talks about the future sustainable mobility plans, not using first-person, and describes the city as a jewel. Parma is one of Italy`s most beautiful cities of art, cultural tourism and gastronomic destination. Parma is known for its monuments, castles, art, cuisine and opera.

A good way to connect people from different nationalities, but united by culture, civilization and history. The European Union is our home and I always say: I feel like a European Italian and an Italian European.

How would you describe your city briefly?

Small but welcoming, rich of history, art and culture. It was the first in Italy to be named “City of Gastronomy” of UNESCO Creative Cities Network, demonstrating how enogastronomy is excellence entirely from Parma. Historically is defined as Little Paris for its beauty and for the importance it has played in history. I'm obviously very connected with the city, being the mayor, but I consider it a jewel.

Share some good practice from your municipality. How you finance them?

The separate waste collection of Parma is considered a model in Italy and Europe. For five years we have reached 80% of collection, demonstrating that even medium and large cities can implement good practices into common life. Thanks to the collection system we receive 700 thousand euros from the Emilia Romagna region as an incentive and, let's call it, award for the quality of our system. In the next years we will work on sustainable mobility, enhancing the network of cycle paths, bike sharing, car sharing and increasing the pedestrian areas in the historic center: we want to make Parma a European mobility city.

Let`s say that Europe should be more open for its citizens, it is often difficult to find news or information about the decisions made by the European Union. This is certainly a defect of our system: the European Union, even before being a bureaucratic union, must be a union of ideas and people. I have to say something in favor of the EU: we often talk about its faults but we pay little attention to all the opportunities it offers.

As I said, we are focusing on mobility policies: I believe that one of the challenges of the near future will be the fight against pollution and for more sustainable and quality environment. This battle passes also and especially from a sustainable mobility and to the service of the citizen, not in the service of cars.

Find out more about Parma here