Fight Club at the European Commission 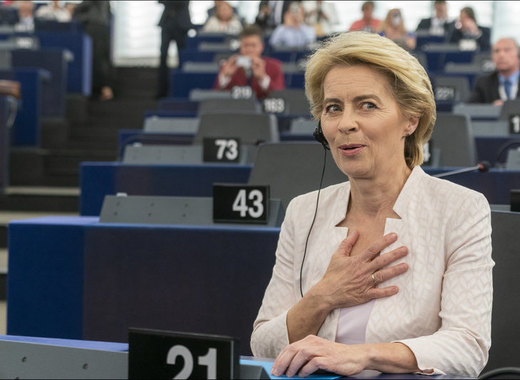 The first rule of European Commission Fight Club? Stream the entire thing to the whole world in order to maximize embarrassment.

26 players entered the arena when European Commission President-elect Ursula von der Leyen announced the names of her team. That number was very quickly cut down to 24 when the European Parliament’s Legal Affairs Committee rejected the Hungarian and Romanian nominees and it was reduced even further when the French pick for commissioner, Sylvie Goulard, was rejected by the Parliament’s internal market and industry committees.

But what on Earth happened? Aren’t these types of hearings supposed to be just a formality? A rubber stamp to make the backroom deals conducted by national politicians official? It seems like the European Parliament has finally managed to find its voice. Not only did MEPs get what they wanted in terms of policy promises, but they also managed to inflict serious pain on everyone who they blame for all the injustices in the world – the murder of the  Spitzenkandidat system, the dismantling of the rule of law and of course all the slights – both real and imagined.

If it wasn’t already clear enough, Europe is the only continent taking the threat presented by climate change seriously. But the European elections in May took it to a whole other level. Encouraged by the so-called Green Tide which swept across Western Europe, Green parties and green-minded MEPs managed to not only put climate policies on the table, but they also managed to push them to the very top of the Commission’s agenda.

Evidence of this newfound appetite for Green policies can be found even before the elections, when the conservative European People’s Party for the first time decided to explicitly state their views on tackling the crisis.

Then came the announcement of the new Commission’s flagship policy – the European Green Deal, which was meant to be spearheaded and brought to life by current Commission Vice President Frans Timmermans.

The hearings themselves dragged the topic even further up the agenda with a large number of commissioner-designates having their portfolios somehow involved in the Continent’s envisioned energy transition. This only speaks to the fact that Ursula von der Leyen has taken the demands of the Greens seriously regarding climate policies, having them intertwined with her Commission’s main objectives at all levels.

The European Green Deal is not the best and only examples of how seriously the future Commission is taking the threat of climate change. More specifically, one can look into the hearings not only of Frans Timmermans, but also of Elisa Ferreira, the commissioner-designate for cohesion and reforms – the person who will be responsible for ensuring a right, just and effective energy transition at the local level.

Unfortunately, climate policy was the only broad subject on which MEPs could actually find real common ground.

An eye for an eye

Immediately after the results of the European Parliament elections were announced, it was obvious that it would quickly get messy.

A few long nights and the European Council barely scraped together a deal, which barely passed through parliament – thus the Ursula von der Leyen Commission was born.

And right after that it all went up in flames. Even the very announcement of her potential commissioners and their jobs was met with a cold shoulder when the names of the different portfolios appeared to have been picked at random from a late night game of Scrabble.

To make matters even worse, the three main parties making up von der Leyen’s majority – the centre-right EPP, the centre-left S&D and the liberal Renew Europe failed to agree to a temporary ceasefire prior to the hearings.

As a result, the liberals teamed up with the socialists to kill the Hungarian candidate’s nomination in the European Parliament Legal Affairs Committee and then promptly turned around and with the backing of the EPP rejected the Romanian nominee.

Two of the main parties had now each lost a candidate, forcing Ursula von der Leyen to seek new names. But the Liberals remained unscathed. That is until their biggest heavyweight, Emmanuel Macron’s pick for commissioner, Sylvie Goulard, boasting an extremely hefty portfolio covering all manner of subjects – form defense to the Internal market, was forced to go through not one, but two hearings and to submit over 50 pages of written answers to specific questions – only to be handily rejected with an overwhelming majority.

It must be noted that this ultimate rejection of Mrs. Goulard comes in the wake of a massive lobbying campaign by Emmanuel Macron and Angela Merkel to rally support for her candidacy. All for naught in the end with the blame being put right at Ursula von der Leyen’s doorstep.

With everyone now licking their wounds, let’s see where things might go from here.

On the one hand, there appears to be a broad positive consensus on the future Commission’s approach towards climate change – exemplified by the great amount of support pouring in for candidates like Frans Timmermans and Elisa Ferreira.

On the other, bitter arguments will be dividing this parliament and this commission throughout their mandates on pretty much every other issue.

It is tough to imagine that the European Parliament is satisfied with the sacrifice of the French candidate. Exacting revenge upon the man who single-handedly dismantled the Spitzenkandidat process might demand even more blood to be shed.

Meanwhile, an embarrassment of such epic proportions will be a very tough pill to swallow for the Jupiterian French president, paving the way to more confrontations in the future. If Emmanuel Macron decides to make it his objective to hinder the work of Parliament, MEPs might come to regret their Pyrrhic victory.

Yet the rejection of the three candidates from the three main parties can also be seen in a different lilght. Has Parliament finally found its voice? Is it ready to reinvigorate European democracy? By actually debating and keeping other powers in check, the EP is combating one of the main complaints against the EU – that every deal is a backroom deal.

With the European Parliament getting what it wants and the European Council appearing powerless to stop it, it seems like the End Times might be upon us. But such conflicts have always been the bread and butter of the European Union. So, who knows, maybe the inter-institutional clashes will be to the benefit of us all.

And if not, well, at least we have a strong climate policy.