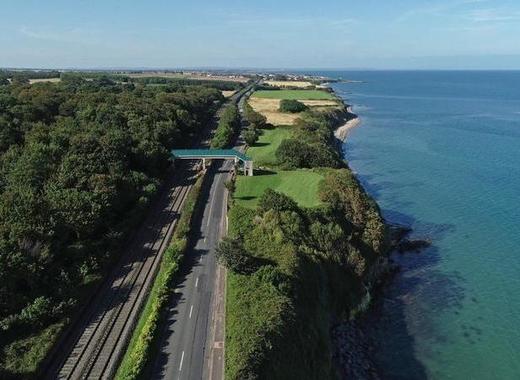 Fingal County Council’s project team has launched a series of public engagement events to discuss the development of the Fingal Coastal Way.

The proposed project envisages the creation of a walking and cycling route along the scenic coastline that will connect the townlands of Newbridge Demesne, Donabate, Rush, Loughshinny, Skerries and Balbriggan.

According to the Council, the proposed rural and urban greenway will spur recreational activities such as walking, jogging and cycling. Apart from that, it will serve as a lucrative alternative transport option for school children and commuters. In a nutshell, the project promises health, environmental and economic benefits to Fingal that cannot be brushed aside.

Commenting on the project, Mayor of Fingal Cllr Eoghan O’Brien said: “I look forward to seeing this project, which will undoubtedly become a flagship tourist amenity for Fingal, becoming a reality.  It will connect to the proposed Broadmeadow Way, which will link Donabate to Malahide. The Council is delivering a network of greenways to encourage sustainable transport for community and leisure.”

Greenway infrastructure a key priority for the Council

The proposed scheme is still at an early stage so the interests of local stakeholders must be aligned prior to the development of potential route options. Therefore, Fingal County Council views the public engagement evenings as the ideal venue for special interest groups, local residents, businesses and landowners to learn more about the project, share opinions and resolve differences.

The provision of greenway infrastructure is a key priority for Fingal County Council. As Chief Executive AnnMarie Farrelly explained: “Greenways deliver tremendous benefits in terms of economic development and recreational amenity, and can also play a key part in Climate Action.”