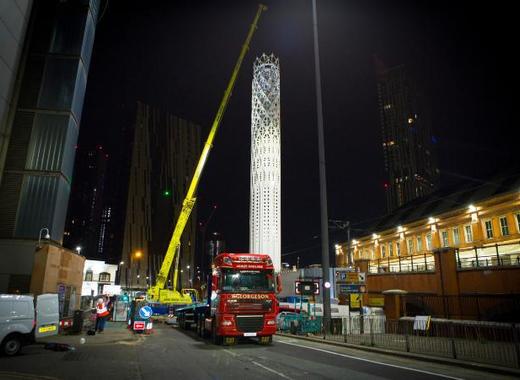 Manchester’s Tower of Light – a key and integral part of the city’s plans to become zero-carbon over the next couple of decades – is nearing completion. Earlier last week, local authorities put the final sections of the Tower in place as it is getting ready to get into operation.

Manchester’s Tower of Light is part of the city’s larger Civic Quarter Heat Network project. It is made up of a total of 9 sections – or “drums”, and it is meant to fulfil the role of a chimney for the low-carbon energy centre, part of the project.

The Network itself, upon completion, will generate environmentally friendly heat that will ultimately save some 1,600 tons of CO2 emissions each year. Furthermore, the project will become more and more effective as additional buildings are connected to its grid. Upon its launch, the Network will service 7 major landmarks of Manchester, including the Manchester Town Hall, the Manchester Art Gallery, the Central Library and others, with more to be added soon after.

The entirety of the Network is meant to be completed by the end of 2020 at the latest and will play an instrumental role in making Manchester more environmentally friendly and in aiding its authorities in achieving their climate targets.

Manchester City Council's Executive Member for the Environment, Planning and Transport, Councillor Angeliki Stogia, stated that "The Tower of Light is an impressive new landmark for Manchester and a symbol of Manchester's aim of becoming a zero-carbon city by 2038 at the latest.

"On completion, the Civic Quarter Heat Network project will realise significant carbon savings, supporting the council's current plan to halve its own emissions by 2025 - which will be an important milestone on the road to the city meeting its ambitious goal."