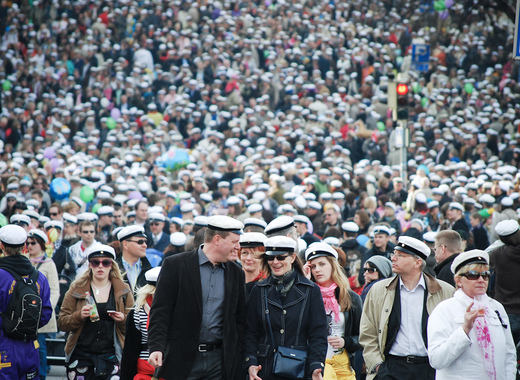 Source: Vappu Crowd by Candida.Performa on Flickr (CC BY 2.0)

On 1 May Finnish citizens celebrate not one, but two holidays – Labour Day and Vappu, celebrating the end of winter. But this year, for obvious reasons, celebrations will be quite different.

Traditionally, 1 May is the perfect occasion for partying in Finland. In calmer times citizens usually gather in the city’s green and open spaces to enjoy themselves, they will celebrate the coming of spring and leave their homes for picnics in nature. But due to the coronavirus pandemic, celebrations will be quite different this time.

Municipalities protecting the health of citizens

National regulations in Finland forbid for the mass gathering of people during the pandemic. That means that the traditional Vappu celebrations can not be conducted as if it were business as usual. Instead, municipalities and local governments around the country are urging their citizens to instead remain at home and party where it’s safe and where they can limit the spread of coronavirus.

In Helsinki, authorities have already introduced a number of measures that aim to discourage outdoor activities during the festive period. They include the removal of public toilets in the traditional picnic areas, a temporary ban on trade in market squares so as to prevent overcrowding and the suspension of the usual extra services provided by the city’s public transport network. Police will also be extra vigilant and watch out for those breaking quarantine rules.

Furthermore, the Havis Amanda statue that is usually a centrepiece of celebrations will be walled off in order to prevent people from gathering around it. The statue will also be guarded by municipal police starting today 30 April.

Instead of the usual outdoor celebrations, Helsinki authorities have set up a number of virtual ones. Citizens will be able to watch a live stream of the traditional Havis Amanda capping, that will then be followed by a concert, organised by the municipality.