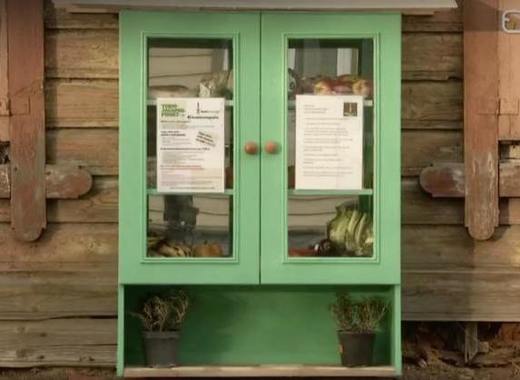 The first food sharing cupboard in Tartu has been opened by active citizens who want to reduce food waste in Estonia’s second largest city, ETV reported.

The green wooden buffet can be found in the Karlova district next to Barlova Bar. There one can leave unwanted but edible fruits, vegetables, plants, eggs and cheese for other people to use. Placing meat and fish in the box is prohibited, however.

The food sharing cupboard was filled with food in a matter of hours after its launch. TV footage showed peppers, bananas, lemons, carrots, apples, broccoli, and other foodstuffs inside.

The box was installed by Foodsharing Tartu, an NGO headed by Kerly Ilves, who said he was inspired by seeing similar solutions in Berlin.

Around 88 million tonnes of food end up in the trash bins across the EU annually, which has an associated cost estimated at 143 billion euros, according to a European Commission statement in 2016.

In Germany alone, each person wastes around 81 kilograms of food on average each year. To curb this trend, “foodsavers” registered in cooperatives like Foodsharing in Berlin pay daily visits to shops, bakeries and supermarkets around the city to pick up leftovers - food that has not been sold or will soon pass its expiry date. As DW has reported, cooperative members can choose whether to keep it themselves, or take it to one of around 25 "Fairteiler" (fair-share) fridges and cupboards around Berlin. But the grassroots initiative in Berlin faces a risk, because authorities class the food-sharing containers as food businesses because they are public.

Two female students were recently fined €225 and sentenced to communal work for fetching food out of a supermarket dumpster near Munich. By German law this act is qualified as theft, as food that has been disposed of remains a supermarket’s property until garbage collectors take it away.

In 2016, France passed a law that bans supermarkets from throwing away edible food by obliging them to pair up with a food waste NGO that can redistribute this food.

Italy passed a law against food waste in 2016, meant to make it easier for food retailers to donate food to charities and food banks.

In its 2016 Statement, the European Commission voiced a commitment to fight food waste at the European level by elaborating a common methodology to measure waste, creating a platform to define measures against waste, facilitate cooperation, and share best practices, and improve the way food products are marked, in particular, the "best before sell date". Critics, however, have described the Commission's efforts as “intermittent and fragmented”.

Nevertheless, food sharing initiatives are gaining momentum around the world, including in the USA and the UK. The model of using public food distribution containers has been copied in Spain through the “solidarity fridge” supported by the mayor of Galdakao in the northern Basque region.