Tourists might soon explore the narrow Andalusian paths by air 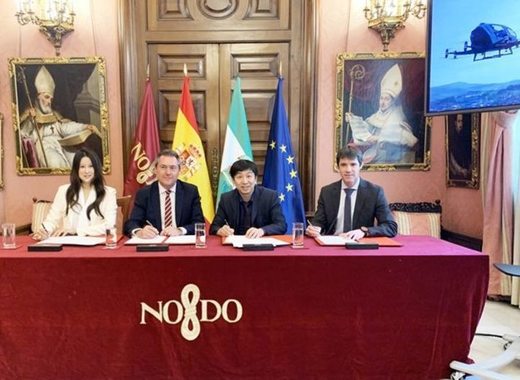 Flying above traffic congestion in the city no longer sounds like science fiction. The Spanish city of Seville, in cooperation with autonomous aerial vehicle giant EHang, is one step closer to making urban air travel a reality.

Seville – a frontrunner in UAM development in Spain

On 10 March, the Chinese company and the mayor of Seville, Juan Espadas, signed an agreement allowing for the first urban air mobility (UAM) pilot to start in the city. As per the document, the company will work closely with the local government to develop urban air mobility solutions, ranging from passenger transportation and logistics, to command and control platforms.

Also, Seville will assist with applications for permission to conduct test flights, in accordance with national and EU legislation, and will participate in the planning of flight routes.

In order to celebrate this ground-breaking agreement, EHang will perform a light show. It celebrates the 500 years since the departure of Magellan from Seville on his voyage around the world.

The Mayor of the capital of Andalusia stated that this technological partnership is also a great opportunity for his city and underlined that Seville has a history in aviation. He expressed his belief that this cooperation could facilitate the commercialization of its UAM ecosystem in Europe.

Enhancing the tourist offer of Seville with new technologies

Espadas also explained that in Seville, the culture of which exceeds 2000 years, has plenty of paths, particularly in the city centre, that are too narrow to be accessible by automobile. So, the UAM could prove a solution to this, while preserving the historical heritage and alleviating traffic.

Finally, the CEO of EHang Mr. Hu Huazhi also said that they are considering the establishment of aerial tourist routes within the city of Seville, allowing for the city to enhance even further its tourist offer.