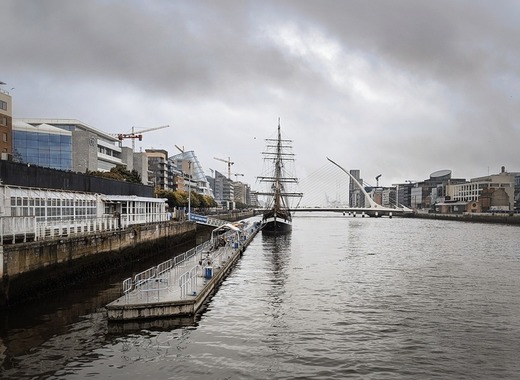 If climate change doesn’t abate, nearly 13 000 homes in Dublin City will be affected by extreme coastal flooding. This prediction, which came on the heels of a grim warning by a leading climate expert, was made by Laura Burke, Director General of the Environmental Protection Agency (EPA). She was speaking November 6 at a conference on sustainable housing, organised by the governmental Housing Agency.

Currently, about 600 homes in Ireland’s capital city are in jeopardy of coastal flooding. But the real scenario of rising sea levels and weather events getting more severe and frequent means that the number of homes that will either be destroyed or experience flooding will mushroom to around 12,848, she estimated.

Burke urged local authorities to make adaptation plans with measures aimed at mitigating the effect of flooding and storms on homes and businesses in their areas. Among the possible steps she cited moving people out of homes and erecting protective walls and bollards to block high tides.

Disaster preparation should go hand in hand with construction restraints, Burke cautioned. She recalled how during the building boom there was development going on in areas prone to flooding. Those mistakes will come at too high a price, said the head of the environmental watchdog.

Taking the floor at the event, Minister for Housing Eoghan Murphy said that the State must ensure “fixing the housing sector in a sustainable way”.

“If we are to address the climate crisis we must move towards compact growth and concentrate the delivery of housing within the current built up areas of our towns and cities,” he said.

“Providing more homes within these areas will increase population densities and allow for more public infrastructure, public transport and facilitate more people to walk and cycle.”

Michael Carey, chairperson of the Housing Agency, outlined four “key pillars” to meeting current and future housing needs in Ireland: careful planning, good design, quality construction and good density. He stressed that sustainable communities should be at the heart of Irish housing policy.

Earlier this week, Prof. Peter Thorne, one of Ireland’s top climate change experts, warned that over the coming decade, a catastrophic storm during high tide will leave thousands of homes, businesses and landmark buildings in Dublin under water.