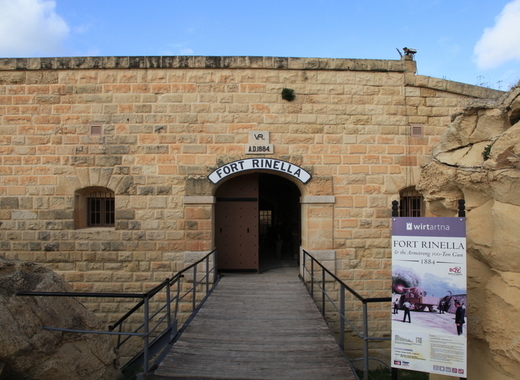 Fondazzjoni Wirt Artna (FWA), which manages Fort Rinella in Kalkara, Malta among other historical landmarks, has announced plans to restore the fortification’s retractable Guthrie bridge. Having secured €60,000 private funding, the project envisages construction of a replica of the fort’s original bridge. Some of the original parts will be used in the process following restoration.

“Our objective is not to have an exact replica of the original bridge, but make it fully operational for visitors to have a complete experience. This will be the only such operational structure in the world,”  said FWA’s Mario Farrugia, quoted by the Times of Malta, during a news conference.

The bridge was named after Charles T. Guthrie, the British engineer who had designed it in 1869. Its uniqueness and advantage over traditional drawbridges was that it would slide into the fortification when not in use. Thus, when closed, it would not obstruct the fort’s gate, and would allow a more efficient defence in case of attack.

The bridge - built between 1878 and 1886 - consists of two parts: a rolling platform and a counter-weight mechanism supporting the bridge. Mario Farrugia recalled how parts of the mechanical structure had been found scattered around the fort’s premises, when the foundation had taken over the site in 1991. He admitted that because of the scarcity of historical data, the restoration project became possible only thanks to the standing orders of the Malta Garrison of 1897, which contained the operational drill of the bridge.

“This enabled us to understand the scientific model and hence be able to recreate the mechanism thanks to new technology in collaboration with the University of Malta,” Farrugia said.

The weight of modern motorised vehicles and trucks was more than retractable bridges could endure, so they started to be phased out in the 1920s. Fort Rinella bridge, on its part, was replaced by a masonry one in the 1930s. Enemy bombing in World War II partially destroyed the new structure.

According to FWA estimates, the project will take one year to complete.