Wild geese have always been a thorn in the side of local authorities, but the ongoing pandemic makes it even harder to deal with the problem 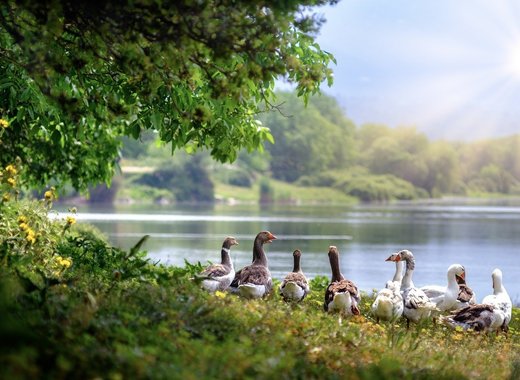 Wild geese are no strangers to the banks of the Main in the German city of Frankfurt. The region has always boasted a significant number of animal inhabitants who have also been creating a significant amount of problems for both locals and city authorities.

With springtime also comes animals’ breeding season – a time when the wild geese population in Frankfurt tends to skyrocket. And due to the heavily restrictive isolation measures in place throughout the city, the animals might be able to have free reign while the humans are stuck in their homes.

Geese are particularly nasty and territorial creatures. Over the years, city authorities in Frankfurt have attempted to control their spread and to contain them in different ways – mostly to no avail.

This year might prove particularly difficult. On the one hand due to the absence of humans in public areas, and on the other because of the municipality’s greenery efforts as a response to climate change. Geese are especially attracted to large green swathes of land – which makes Frankfurt and even better destination for them, thanks to the city’s efforts in becoming greener and having more green spaces across the urban area.

Local authorities are currently developing two solutions to the issue that if left unchecked can quickly get out of hand – much like the Finnish capital of Helsinki’s wild rabbit problem, which has been pestering locals for decades.

Not only has the municipality employed a hunter that must keep an eye out on the birds and prevent them from intruding into people’s lawns and swimming pools, but it has also begun construction of hedges and fences that might make the area seem less attractive to the intruding geese, thus prompting them to leave.