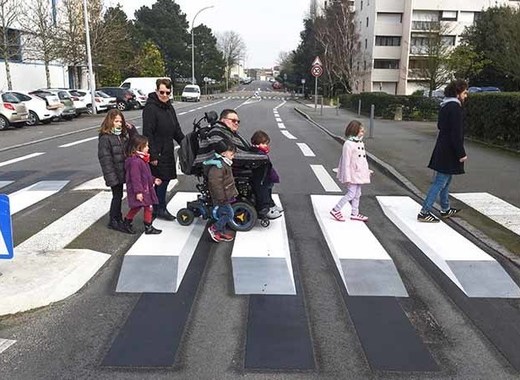 An experimental safety measure is being implemented in France since June 2018. It works in a very simple manner and promises great results in increasing road safety, as far as high speed is concerned: instead of painting crosswalks in white rectangular shapes, they are now being decorated with shadows, so as to create the impression of a 3D object. This way, arriving drivers will be tricked into believing there is something blocking the road, thereby instinctively reducing high speed, which does not necessarily happen all the times, despite regulations.

The city of Nantes is one of the joiners, having just repainted in such a way two of the existing crosswalks – on street Berligout at Sautron and on street Déportés at Rezé. In fact, the city will be trying this measure for the third time in April on Eugène-Thomas streets, as it has 4 or 5 pedestrian walks already designed like this each year from 2013 to 2017. The first official evaluations of the impact of the measure will be conducted this autumn and the program is expected to last until 2020.