French city designs showroom to develop autonomy of the elderly

Conceived in the context of the Grand Debate on Longevity, the exhibition space is expected to open in September in Nantes, offering home support solutions for to the elderly 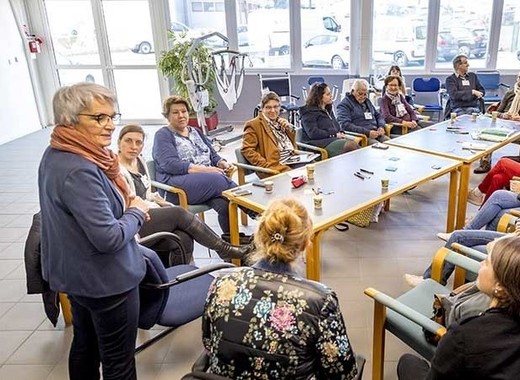 The Third Grand Metropolitan Debate has gathered a designer, occupational therapist and a group of fifteen residents in Nantes. They have worked together on the opening of a showroom where concrete solutions will enable old people to live the longest time possible and in the best home-like conditions. The showroom concept was born following several meetings of the so-called Community of Creators, the last session of which was attended by Claudine Chevallereau, Vice President of Nantes Métropole.

The Creators’s community that played a main role in the development of the “Modular home” is composed of senior citizens, professionals from the healthcare sector, united to resolve the issue of systematic placement of old people in health establishments. The exhibition space is imagined as a real home with modular pieces adaptable to the specific needs of the visitors, which are caused by reduced mobility, impaired vision, etc. The common space which will also propose situational and escape games will most probably open doors in September 2019. Its ultimate goal is to be adapted to the needs of aged people dependent on support from another person.

Finally, The Grand Citizen Debate, under the framework of which the showroom for the elderly was born, was launched after a resolution by the Metropolitan Council of Nantes at the end of 2018 with the objective to mitigate the noticeable effects of the growing population and to react to the demographic transition in France. The debate is involving 24 communities in the metropolis for four months now. The consultation phase about to be concluded any time now, a Prospective and Citizen Festival is expected from 16th to 19th May 2019, followed by drafting of a final report in September.

Learn how to get involved here (In French).