Gdansk is getting sustainable from top to bottom 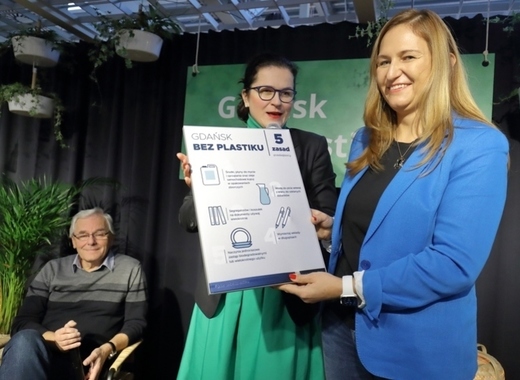 Fully aware of the fact that politicians should be the leaders of societal change, the Polish city of Gdansk has started a series of sustainable development measures. In February this year the city hall announced the "Gdańsk without plastics" program. It is directed primarily at the residents and previews the implementation of 10 principles on how to be more environmentally-friendly.

The project was met with positive feedback from the residents: the number of people using cotton shopping bags increased, reusable water bottles have become fashionable. The city of Gdańsk thus decided to stimulate the expansion of the action from private to professional life.

Today we want to invite entrepreneurs to this action, emphasized Mayor of Gdansk Aleksandra Dulkiewicz at a special conference on Monday. “I think that you must always start with yourself. When we began to persuade the inhabitants of Gdańsk to think more economically, prudently, we also began to introduce changes in the city hall. I was surprised by the effects - when we introduced glass bottles and water jugs, which are used during business meetings, for example, we got rid of 18,000 plastic bottles in 2019 alone. This is a very tangible sign of how change can happen. In addition, more and more letters that I sign are prepared from ecological paper, i.e. recycled.”

Finally, in recent months, the city has introduced "green public procurement". Whenever the city hall orders various products, it introduces a clause urging bidders to "demonstrate" an ecological approach to their business.

IKEA was the first company that decided to join the "Gdańsk without plastic" project. Małgorzata Dobies - Turulska, director of IKEA Gdańsk emphasized that the store began introducing changes before they were mandatory, starting with single-use plastics. She explained that initially this looked difficult as they wondered how to approach the task, how to get rid of straws or disposable garbage bags. They were soon to discover that the biggest difficulty lies in their heads. In practice, it turned out that business life without plastic straws is possible, alternative paper solutions appeared quickly, filters for tap waters were introduced.

“We still use plastic bottles, but reusable ones. Because that's also the point - it's not about suddenly getting rid of all the plastic. For today, we do not have such a solution as to fully replace this plastic, but the one that we can eliminate - why not do this”, she continued.

As part of the "Gdańsk without plastics" campaign, various activities are also carried out, or have been implemented in recent months, to entice ecological activities. They include art competitions for students, pilot projects for families who want to change their habits and eliminate plastic from their lifestyle, competitions in social media or picnics for residents.