For two weeks, Gdansk becomes the arena for discussions on contemporary development, democracy and history 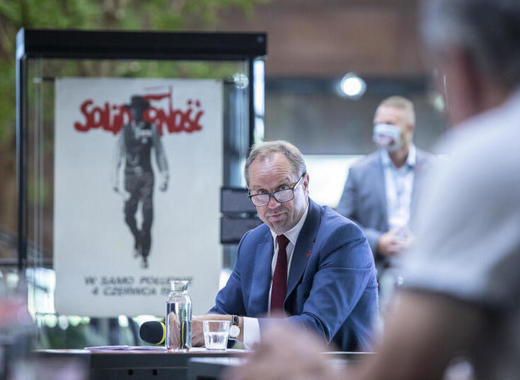 This year marks an important event for the democratic history of Poland and even that of Eastern Europe. The country commemorates the 40th anniversary of the August Agreement in Gdansk, which gave birth to the Solidarity trade union and laid the foundations for irreversible democratic changes. Accordingly, Gdansk has prepared an abundant programme, adapted to the pandemic situation.

Details of the Freedom and Democracy Day celebrations organized in Gdansk were presented on Wednesday, 12 August, at a conference at the European Solidarity Centre attended by Mieczysław Struk, Marshal of the Pomeranian Voivodeship, Aleksandra Dulkiewicz, Mayor of Gdansk and other representatives from the cultural, academic and non-governmental sectors.

It was unveiled that celebrations will commemorate not only the events of August 1980, but also the people who were involved in the great protest. One of these events will be the "We were finally returning to our own home" project co-organized by Wybrzeze Theatre.

The title refers to the famous August 1980 "Artists for the Republic of Poland" campaign when a group of actors performed poetry in the BHP hall of the Gdansk Shipyard. The event will be reconstructed and immortalized in a series of photographs, on the stage of the Old Pharmacy.

The event will take place on Sunday, 30 August, at 5:00 p.m. The most important part of that evening will be the presence and memories of the honorary guests - heroes who participated in the August events.

And on Monday, 31 August, at 10:00 a.m., the symbolic opening of the historic gate No.2 of the Gdańsk Shipyard will take place, a tradition that was begun six years ago.

All events are held in accordance with the sanitary rules and restrictions related to the coronavirus epidemic. Which is why there will be no major events this year at the People's Meeting Square.

However, the so-called Social Zone will be built again at the European Solidarity Centre where non-governmental organizations will present themselves. On Monday, 31 August, the zone will turn into a town hall, where local government officials will talk about the most important issues facing the country.

Basil Kerski, the director of the European Solidarity Centre, emphasized that the Freedom and Democracy Day is a special moment for the entire team because public participation events will take place for the first time after many months of closure due to the coronavirus. For this reason, they will also have a slightly different arrangement this year.

Many of the events will be broadcast online. The permanent exhibition is open and it will be possible to visit it during the celebrations. However, the number of places is very limited, hence registration is required for all events.

Reminders that history repeats itself

The start of the celebrations was already given on Friday, 14 August, the day marking the Solidarity strike by four young people from Gdansk, later joined by Lech Wałęsa. On the same day and place (10 Sienkiewicza Street in Wrzeszcz) four decades later, the city mayor unveiled a commemorative plaque. Dulkiewicz appealed locals to remember their neighbours and appealed for solidarity with Belarus.

She revealed that talks were underway to add events devoted to the Belarusian struggle for democracy to the celebration's agenda. “We - Poles, Gdańsk citizens, Pomeranian citizens, cannot stand helpless and remain silent in the face of the situation in Belarus. Where people wanted to gain their dignity in a peaceful, democratic way because elections provide for that. We are making efforts to ensure that the Belarusian focus is strongly emphasized during the celebration of the 40th anniversary of the Gdańsk Agreement”, announced the Mayor, as quoted on the municipal website.