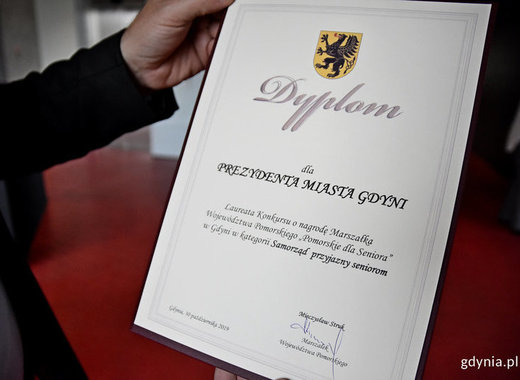 Gdynia takes good care of its seniors. This is what a recent award granted to the Polish city by the Pomeranian Voivodeship confirms. The distinction responds to the exemplary efforts of the local government to implement pioneer projects, such as intergenerational dialogue, activation of seniors on a large scale and participatory activities for them.

The Pomeranian Voivodship praises the elderly policies of Gdinya

Agnieszka Kapała-Sokalska, a member of the Board of the Pomeranian Voivodship, handed the award to Michał Guci, Gdynia Vice President for Innovation on 30th October. The distinction was received in the "Pomeranian for Senior" competition, in the category "Senior Friendly Self-government".

Over 13,000 Gdynia residents aged 60+ use the offer of six city senior clubs as well as classes at the Gdynia University of the Third Age. In July, the city authorities announced that in the historic building of the oldest school in Gdynia, a Modern Senior Centre will be created. This is meant to be a place for meetings, integration, learning and vocational expressions, which will be used by seniors from all over Gdynia.

People whose health condition requires support - be it in the place of residence or in a specialized institution - are taken care of by the Municipal Social Assistance Center. Their activities are coordinated by the Senior Support Centre.

One of many distinctions for making the city more inclusive

In 2017 a process intergenerational dialogue was initiated in the city, leading to the creation of a strategy of local government activities adapted to all generations. Also, Gdynia was the first city in Poland to be awarded the title of "Age Friendly City" by the World Health Organization and the first in the country to launch an active senior policy 15 years ago.

Furthermore, it was in Gdynia that in 2004, by the decision of the city president, the first Seniors' Council in the country was established. At the same time, the basics of Gdynia's senior policy were developed. Today, the Senior Activity Centre and the Municipal Social Assistance Centre, as well as the Social Innovation Laboratory and the Gdynia Sports Centre deal with the implementation of the program emphasizing care, activation and participation.