Genoese Lighthouse in Constanta lights up after 107 years 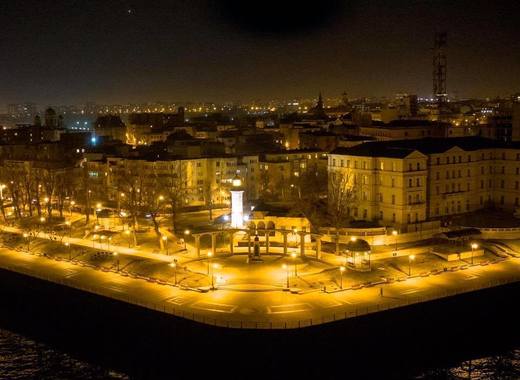 Decebal Făgădău, mayor of Constanta  together with the President of the Constanţa county branch of the Armenians’ Union in Romania, Liviu Merdinian, lit up the Genoese Lighthouse after a pause of 107 years in which it was a silent witness to Constanţa's history. The emblematic edifice of the Romanian seaside city, which ceased to function in 1913, was brought to life again, informed Mayor Făgădău in a Facebook post.

The lighting up was an initiative started in October 2015, when mayor Făgădău and Mr. Merdinian inaugurated the heritage plaque for the Genoese Lighthouse.

The project proved lengthy and complicated, as the lighthouse  needed vital mechanisms including a new magnifying glass which was extremely hard to find. Luckily, the old magnifying glass was successfully restored thanks to the support of the Marine Museum.

Little is known about the history of the Genoese Lighthouse which replaced an older lighthouse, built around 1300 by Genoese merchants trading at the port. The original structure was rebuilt between 1858-60 by French-Armenian engineer Artin Aslan, who fell in love with Miriam, one of Radicevici's nieces, and never left Constanța.

The lighthouse was in use between 1860 and 1913, when the role of guiding the ships to the port of Constanta was assumed by the more modern Carol I lighthouse, located at the end of the dock in the seaport.

No interference with maritime traffic in the port

The Genoese Lighthouse is 12 meters in height but it looks much taller because it is situated on an elevated platform above sea level. Now, the stand is adjusted to current specifications, so as not to interfere with maritime traffic in the port.