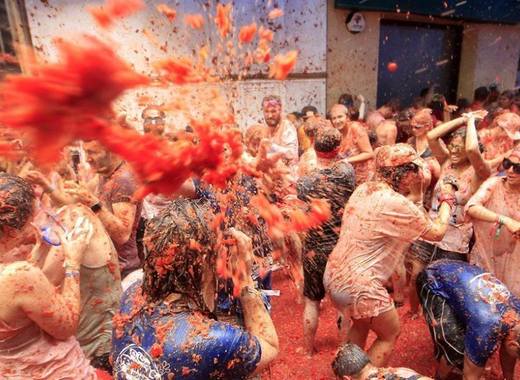 La Tomatina is a food fight festival held on the last Wednesday of August each year in the town of Bunol near to Valencia in Spain. The origin story of the festival started on the last Wednesday of August 1945 as a few young people were in the main square watching a parade. They wanted to join in and interrupted the parade, causing one of the participants to fall. There was a vegetable stand nearby and soon a tomato fight ensued. Next year, the same boys decided to follow up but brought their own tomatoes — a tradition was born.

Now-a-days the festival attracts thousands of people to the small Spanish city Bunol. La Tomatina starts at 11.00 am and ends at 12.00 sharp. It’s a messy fun, but there are still rules like tomatoes must be crushed before throwing. Participants should wear old clothes that they are willing to throw away after, but shoes with good grip to avoid slipping. Goggles are great because otherwise eyes could hurt from the tomato acid.