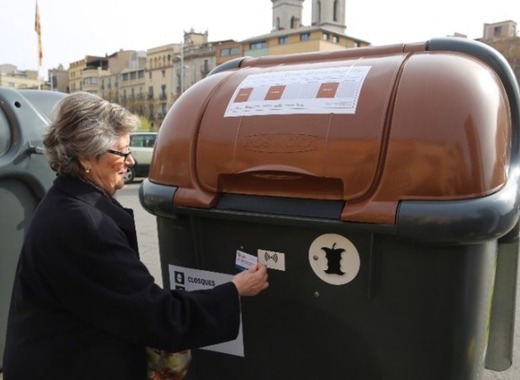 The Girona City Council has launched the system of intelligent waste containers in a sector of the Plaça de Catalunya. This pioneer initiative aims to promote and increase the selective collection and, at the same time, to raise awareness among citizens about the importance of the reduction of waste. The new smart containers allow, by means of an electronic card, to identify whoever uses them and, therefore, the origin of the waste. The containers will be closed and will only be opened with this card that will facilitate the Town Hall to authorize the users. In this way, the illegal and unauthorised use of containers may be controlled. Thus, the new waste collection system will affect 169 homes and 78 establishments. Excluded are bars, restaurants and cafes in the area that will be integrated within the shopping district of the Barri Vell.

From now on there will be only two collection containers on the central road of Plaça de Catalunya: one for organic fraction collected three days a week and the other - to deposit, every day, the corresponding fraction. Thus, the same container will be used to introduce waste from different origins. This unique of the system in Girona in relation to other municipalities that have implemented it and aims to reduce the number of containers on the public road - in the Plaça de Catalunya it will be from seven to two. There will also be a small bucket to collect the sanitary ware three days a week.

Information campaign will be carried out during the first three weeks after the start. In addition, the following material has been distributed by the City Council of Girona to both the houses and the establishments in the area: compostable bags for the organic fraction for six months; transparent bags for waste and packaging for six months; raffia bags for glass, packaging and paper; a magnet with the calendar of the frequencies of collection of the fractions; an informative leaflet; Encoded adhesives to identify waste, and two cards per house to open the containers.

The waste can be deposited between 7 a.m. and 22 p.m. according to the corresponding calendar. Waste bags must be placed on the coded stickers that the City Council has provided and identify each home or establishment.