Years of efforts by citizens and authorities have finally been rewarded 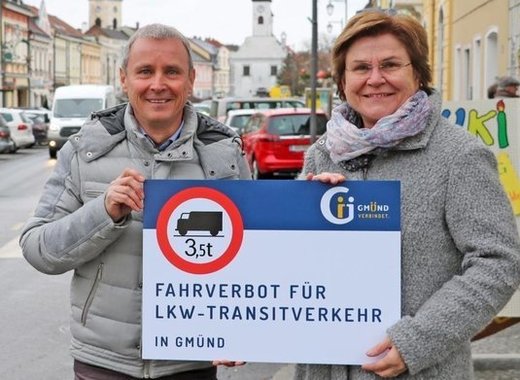 For years now citizens of the Austrian town of Gmünd in the state of Lower Austria have been attempting to block transit traffic of trucks passing through the urban area. Their efforts have finally been rewarded – with a ban on said traffic through the city.

Citizens, authorities and inter-city cooperation getting the job done

Locals of Gmünd were not alone in their plight, however. They were working closely alongside citizens of nearby Ceské Velenice – right on the other side of the border in the Czech Republic.

The joint efforts of authorities and citizens of the two towns were instrumental in achieving the long-coveted breakthrough and subsequent ban.

The mayor of Gmünd Helga Rosenmayer clarified the ban to locals and businesses alike -  "The destination and source traffic of the domestic companies is of course excluded. We want to ban transit traffic from the city centre and thereby significantly improve the quality of life in Gmünd. I am very pleased that this is now due to the excellent cooperation with the state of Lower Austria, the district administration, the executive and the city of Ceské Velenice. "

The new measures are expected to lead to a relocation of all truck traffic not originating from the city itself to the main routes around Gmünd, thus significantly reducing traffic within the urban area and thereby improving the quality of life. Of course, a reduction in traffic also means taking better care for the environment and a reduction in the city’s carbon footprint.

To keep drivers in check and the ban intact, local authorities will be working alongside the regional agencies of Lower Austria in order to perform regular truck inspections in the town of Gmünd. The City Council believes that such checks are vital in order to ensure the longevity and success of the newly adopted measures.