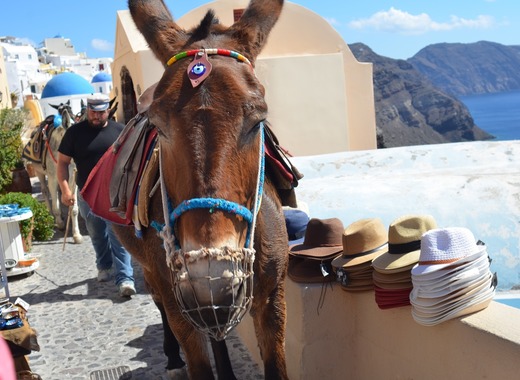 Following the big uproar and international criticism last summer, the Greek government has promised to tighten already-existing controls regarding the use of the donkeys for tourist rides and their inhumane treatment on the island of Santorini.

Last summer, over 110,000 people signed an online petition deploring what they described as the “mindless and unnecessary torture used as cruel transportation for people who want the ‘real Greek’ experience”.

Makis Voridis, the Greek minister of Agriculture replied to a letter of the musician Tommy Lee, who was born in Athens, asking to officially cease the practice of using the donkeys as “taxi rides”. In his answer, Mr Vordis underlined that “The welfare of productive animals, working animals and generally all the animals of Greece is a major concern for me personally and for our Ministry.”

Measures to tighten the controls throughout all territory of Greece

The new working plan of the Ministry of Agriculture in regards to the upcoming tourist season includes measures to tighten the controls throughout all territory of the country. In occasion of events in violations of existing legislation by the audit authorities, the offenders will be subjected to severe penalties. In the law, it is written that the envisaged fine may be up to 30,000 euros.

Minister Voridis also informed that all the statements about donkey mistreatment on Santorini are closely monitored. The Ministry is trying to make sure to keep up-to-date on the latest scientific data and European Commission guidelines aimed at preventing any kind of animal maltreatment and improving their welfare conditions.

The aim of the new mesures is to maintain and support the traditional character of the tourism of the local communities, to improve the economy and at the same time to protect the animals.