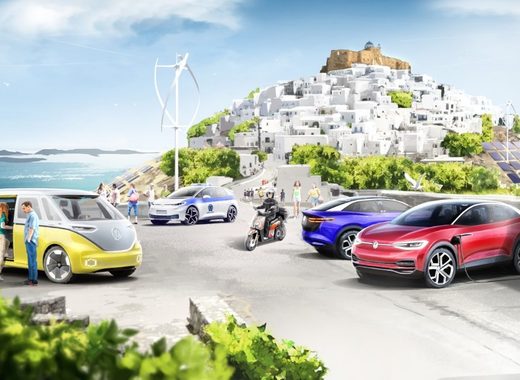 The Greek government and Volkswagen have signed a memorandum for the transformation of the island of Astypalaia into a zero-carbon climate friendly community that will act as a model that can be applied all across Europe and the world.

Changing the lives of hundreds of people

The task that Greek authorities and Volkswagen have undertaken is a monumental one. Together they want to completely transform the lives of the Astypalaia’s 1,300 permanent citizens and turn them more environmentally friendly and climate conscious.

The first step of the plan is to replace all of the island’s 1,500 vehicles with electric ones and to create the infrastructure necessary to support them. Furthermore, a wide range of mobility alternatives will also be introduced- such as scooters and other light commercial vehicles as well as a smarter traffic management system which will together allow the size of the transport fleet on the island to be reduced by a third.

During the signing, Greek Prime Minister Kyriakos Mitsotakis, stated that “I strongly believe in partnerships. Governments can't deliver on their own and the private sector isn't the answer to every question. That is why this ambitious endeavor is the result of the close partnership between the Greek state and Volkswagen Group. A world leader in the automotive industry that aims at making its fleet of vehicles and the company carbon neutral by 2050; coming together with an European nation in full transformation mode.”

The employment of the model developed by Volkswagen on a large scale such as this will allow for other places around Europe to also embrace the approach. This would mean that by embracing the company’s vision, Greece is not only making sure that it can reach its own climate targets but it is also providing other countries with a blueprint of how to achieve them as well.